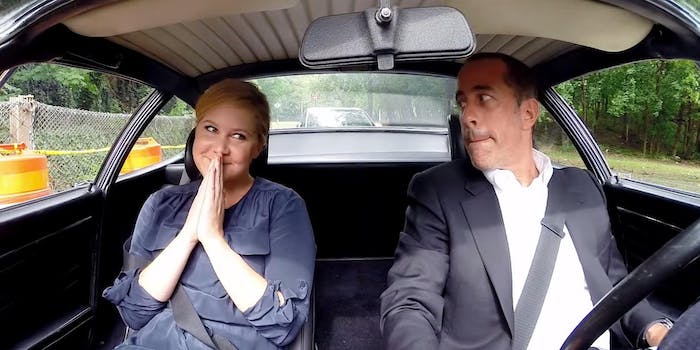 It must be awesome being Jerry Seinfeld.

Not only is he an American treasure, but he has his own Internet show that sees him grabbing coffee with comedians whom he drives around. In the latest installment of Comedians in Cars Getting Coffee, Seinfeld sat down with in-your-face comedienne Amy Schumer.

For this episode, Seinfeld and Schumer climbed into a Ferrari Daytona GTB/4. It’s not the most reliable car the Italian manufacturer has ever made, although honestly it’s hard to think of any reliable car Ferrari has produced. So yes, this 1971 Ferrari was huffing and puffing, but the sound was still pretty incredible. As an added bonus, it frightened Ms. Schumer quite a bit.

The former star of Seinfeld is really enjoying his post-sitcom years. As viewers of CICGC can tell, the man is a huge car aficionado. For most people, a passion for hotrod cars can only get you so far if you can’t afford to drive them. For Jerry Seinfeld, this really isn’t an issue. The comedian has blended his passions for cars, comedians, and coffee into a project that entertains millions.