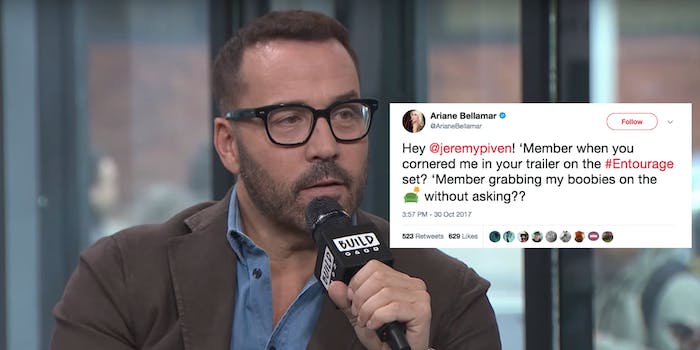 She included the hashtag #MeToo.

Actor Jeremy Piven is the latest prominent Hollywood player to be hit with sexual assault accusations. Reality actress and former Playboy Bunny Ariane Bellamar is on the other end.

Bellamar took to Twitter on Monday, penning a series of tweets about her encounter with the Entourage actor while including the hashtag #MeToo in her post. The two met on the set of HBO’s Entourage when the Beverly Hills Nannies star was cast in a guest role. Bellamar tweeted that Piven made advances on her not only in his trailer, but another time at the Playboy Mansion as well.

“Member when I tried to leave; you grabbed me by the ass, looked at yourself in the mirror, & said what a ‘beautiful couple’ we made?” Bellamar quickly replied to her own tweet, before posting another about their second encounter:

Jeremy Piven, on two occasions, cornered me & forcefully fondled my breasts & bum. Once at the mansion & once on set. #MeToo @AriMelber @CNN https://t.co/liD7irs0o0

The tweets continued as she posted for Piven to not deny the accusations, since she says HBO has tapes of them together, and Sprint may have electronic back-ups of his allegedly abusive, explicit texts:

Piven, in a statement issued to Deadline on Tuesday night, denies the accusations.

I unequivocally deny the appalling allegations being peddled about me. It did not happen… It takes a great deal of courage for victims to come forward with their histories, and my hope is that the allegations about me that didn’t happen, do not detract from stories that should be heard.

While Bellamar’s accusations occur in a heightened period where powerful men are being called out one after another, this is not the first time she has been involved with high-profile sexual assault matters. In 2014, former Entropic CEO Patrick Henry was found guilty of assaulting the reality star. Instead of jail time, Henry was fined $400 and ordered to complete 40 hours of community service.

CBS, which airs Piven’s new series Wisdom Of Gods, is investigating these accusations. HBO issued a response on the issue Tuesday, posted by Deadline.

“Today, via the press reports, is the first we are hearing about Ariane Bellamar’s allegations concerning Jeremy Piven,” the network said in a statement. “Everyone at HBO and our productions is aware that zero tolerance for sexual harassment is our policy. Anyone experiencing an unsafe working environment has several avenues for making complaints that we take very seriously.

Bellamar posted her latest tweet on the matter Tuesday evening, including a picture of her daughter dressed up for Halloween, writing: “This is why I fight. This is why I Roar. @jeremypiven; my