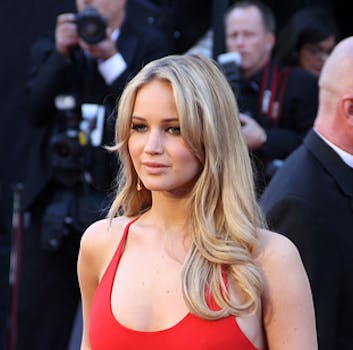 But since the Silver Linings Playbook actress doesn’t think she’s missing anything on your lame Pinterest boards, there’s plenty of room for imitators like @JennifLawrence_.

Since joining Twitter less than a year ago, the social media-ardent teen’s feed (we’ll just personify it as a girl for simplicity’s sake) is a mixture of cajoling her minions to follow Instagram accounts, proclamations of her and her friends’ Kik messenger presences, and her best carefree J-La impression.

Significantly, the account doesn’t identify itself as a parody; it’s blatantly filled with teen’s ramblings and mindless musings.

So the who the hell is Jennif? Why is the account that’s a string of call-outs to an Instagram so heavily followed? Hardcore pimping her Instagram account? And where did the -er go in her name?

First, let’s look at those Instagram accounts. Jennif frequently—and successfully—persuades people to follow tweens’ accounts on the photo-sharing app to boost their follower counts. According to a search on Status People, only 15 percent of the followers are fake, so her constant tweeting about essentially nothing has garnered her a loyal legion of fans.

The biggest target of lately is someone named itslorebro. Jennif obsessively tells her fans to follow it and if they do, well she’d love “y’all forever.” 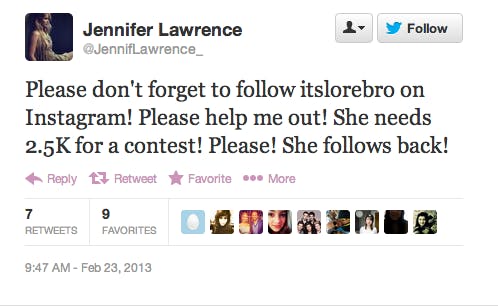 Itslorebro appears to be a blonde who goes by the name Lorelei Camille Johnson, an alleged teen who overshares every aspect of her life. The account, less than three months old, is a collage of selfies, terrible teen image macros, and screenshots of her Spotify tracks. She’s accumulated about 1,000 followers.

Jennif less frequently tells her fans to follow itsalexiabroskii on Instagram using the same pleading methods. However, since the account is set to private it hasn’t garnered as many followers.

Nothing explains why @JennifLawrence_ has garnered 100,000 followers, of course. They aren’t all fake, so they likely weren’t bought; in fact, most of its followers just look like bored teens trawling Twitter for amusement. Most likely, it’s people quickly glancing at the account, hitting follow, and thinking they’re following Lawrence thanks to the account’s avatar being starlet’s face.

And for the record, the real Lawrence isn’t on Twitter. She confirmed to David Letterman that she isn’t on the site, saying it would be a punishment to her.