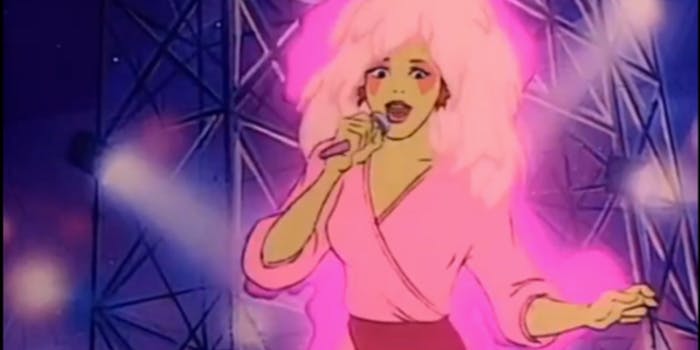 Brought to you by the director of G.I. Joe: Retaliation, Justin Bieber's manager, and the producer of Paranormal Activity.

If you grew up in the ’80s, you likely remember watching Jem, the animated series about Jerrica Benton and her musical alter ego. She was sort of the anti-Barbie, leader of the glam-rock band the Holograms, who often battled “bad girl” band the Misfits. It ran for only about three years, but Jem remains a pop culture reference decades later.

Today it was announced that Jem is being made into a live-action movie, courtesy of producers Jon M. Chu (G.I. Joe: Retaliation), Scooter Braun (Justin Bieber’s manager), and Jason Blum. The script has apparently already been completed by Ryan Lendels. No word yet if any women will be involved in the scriptwriting. Jem was originally created by writer Christy Marx.

According to the Hollywood Reporter, the producers said the film is for “a whole new generation with themes of being true to who you are in a multitasking, hyperlinked social media age.” Lendels’s script also apparently focuses on “an orphaned teenage girl who becomes an online recording sensation.”

Yes, Jem is being remade for the Internet. And, according to the producers, by the Internet. In a YouTube clip released today, they asked fans to offer suggestions for casting, costume design, and music.

“It’s sort of like Kickstarter, but rather than asking for money, we’re asking for your creativity,” Chu says in the clip.

They’re urging fans to submit videos discussing what they like about Jem to the official Tumblr. Further, they’re asking men and women who might want to star in the film to submit videos as a sort of audition. They helpfully point out it’s open to “any age, any gender.” (I had a Jem doll, but I chopped all her hair off to make her look less glamorous. I suppose I thought she was conforming to outdated standards of beauty, but I was also 9.)

Can the men behind Bieber, G.I. Joe, and Paranormal Activity make a realistic movie about aspiring female musicians? Perhaps, with the right input from fans. Updating an ’80s TV show for the “social media age” doesn’t always translate, although the series did feature pre-Siri technology in the form of Synergy, Jem’s badass A.I. program, and hologram projector.