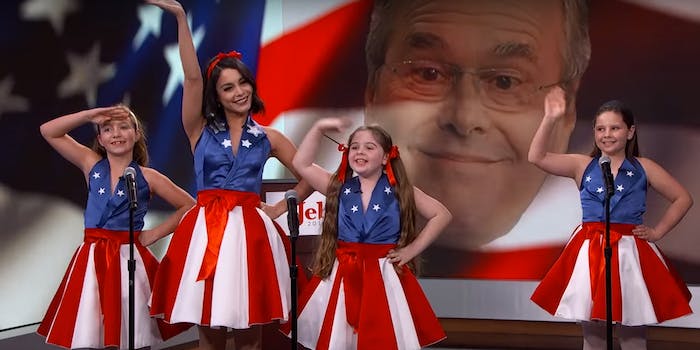 A group of girls performing a bizarre tribute to Donald Trump was one of the many spectacles in a sea of Trump rallies, but there’s someone in the presidential race who probably needs it much more than Trump.

That sort of headline-making stunt might be the right call for a candidate willing to do whatever it takes to wrestle the mainstream media attention away from Trump—a harder thing to do now that he has the endorsement of Sarah Palin. So Jimmy Kimmel, always ready to help, decided to get a different group of singing girls to don patriotic dresses and perform for that other, more needy candidate: Jeb Bush.

They’re about as jazzed singing it as we are watching it, but between all of the fake and exhausted enthusiasm is a surprise appearance from Vanessa Hudgens, something Trump’s version never had.