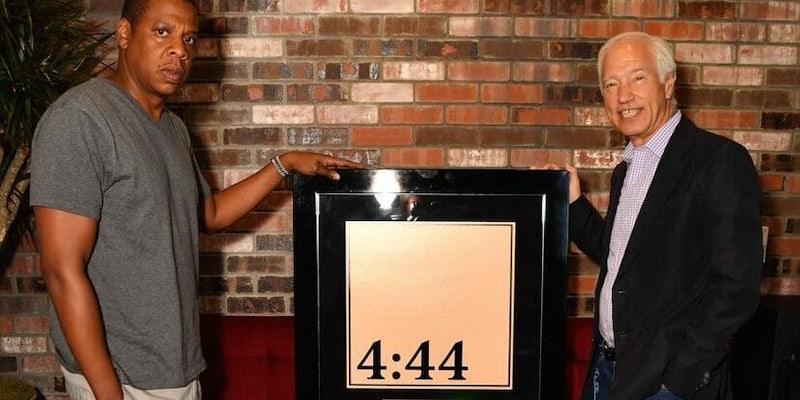 It’s been out for less than a week, but Jay-Z‘s new album 4:44 is already certified platinum.

The rapper’s answer to wife Beyoncé‘s historic Lemonade was released June 30, and was exclusively available to Sprint customers and Tidal subscribers at first. What’s confusing fans is that Roc Nation is reportedly calling 4:44’s platinum status the result of pure streams, which (if true) would demonstrate a huge number of active Sprint and Tidal customers—who are also avid Jay-Z fans.

As Vulture points out, 4:44 still isn’t for sale in most major music outlets (even though a physical edition is supposed to be coming). Tidal has offered a voucher for a free download of the album via Sprint since Sunday, but to go platinum this quickly, 4:44 would have needed to be streamed an equivalent of 1 million times. So were those actual streams that brought him to platinum status so quickly, or was there some kind of music industry loophole being used strategically with 4:44‘s release?

The Recording Industry Association of America (RIAA) seemed to hint that Sprint might have something to do with the album’s quick success in a statement to Vulture:

Under the program’s rules, the artist needs to be compensated and there needs to be demonstrated consumer demand in the United States, either for an on-demand stream or a sale. A sale counts toward a certification if purchased directly by the customer or a business can purchase the album or song and offer it to fans who must take affirmative steps to acquire the album or song.

In other words, Sprint could have purchased a bunch of copies of the record and then offered them to customers separately—essentially using a prepaid business model. Those up-front purchases by Sprint count toward album sales, though, so even if the purchase is made by a company for distribution later, the RIAA counts it as viable toward, say, platinum status.

If this is in fact a platinum-by-loophole case, it’s an example of Jay flexing the exact business savvy he praises on the record. According to Complex, the rapper has more platinum (or higher) solo studio albums than any other hip-hop artist in history.

“You wanna know what’s more important than throwing away money at a strip club?” he asks on “The Story of O.J.”, a winding ode to capitalism and identity from the new album. “Credit.”

Artists like 50 Cent have knocked the record, calling it “golf course music,” but it looks like Jay will be laughing all the way to the bank. As the RIAA points out, no matter what the case with Sprint is, the album’s success isn’t entirely corporate.