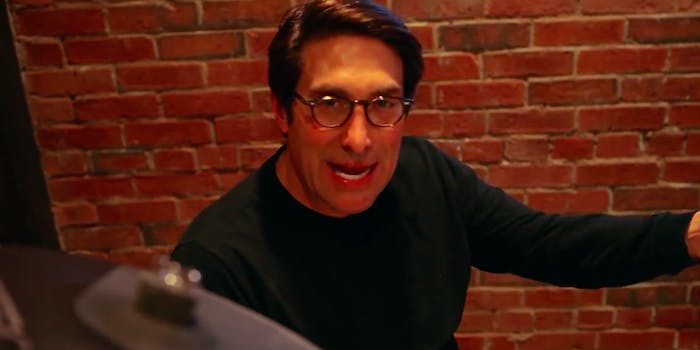 Even their Beatles cover sucks.

President Donald Trump introduced the world to his private attorney, Jay Sekulow, when he tweeted last week that he was under federal investigation for firing James Comey, and allowed his lawyer to clean up the situation on multiple Sunday talk shows.

Not that Sekulow fared much better. He told Fox’s Chris Wallace twice that Trump was being investigated, then backpedaled and argued that Wallace had twisted his words and that Trump was not, in fact, under investigation. (Wallace swiftly corrected him.)

Yet as bad of a lawyer as Sekulow may appear to be, it pales in comparison to how terrible his music is.

The studious folks at Spin revealed this week that Sekulow plays guitar and drums in his self-titled, staunchly right-wing Christian rock band. One could even call it a supergroup of sorts, as the lineup boasts Christian rock singers John Schlitt (currently of Petra and formerly of ‘70s Midwestern rock group Head East) and John Elefante (who fronted Kansas in the early ‘80s and now plays in the Christian rock outfit Mastedon).

Decades after its inception, “Christian rock” still proves a fairly ambiguous term. Some people think Stryper, some people default to Sixpence None the Richer, and others still look to Underoath as the holy grail of the genre. But as it turns out, the Jay Sekulow Band can’t claim a single redeeming feature from any of those artists. Instead, they just plod through painfully irrelevant lite-rock with the subtlety of a divine smiting stone.

Look no further than “Undemocratic,” the raucous, anti-Hillary Clinton barnburner that I can only describe as a fifth-rate Tom Petty tribute band soundtracking the latest episode of InfoWars. But hey, damned if you don’t believe Schlitt’s conviction when he wails those magnitudinous opening lyrics: “Strummin’ on my Gibson, singing my song now, hoping that the feds won’t take it away now!”

Church and state have made notoriously volatile bedfellows throughout history, and the band’s more religiously inclined work does nothing to improve its standings. “Through the Years” functions as a perfectly earnest—albeit cookie-cutter—praise song, though it’s hard not to scoff at the fact that the man who legally represents Trump in court plays on a track that sports the lyrics, “He is in need of no wise counsel.”

Not that their lyrical content or musical integrity matters, because these guys are plain-as-day heretics anyway. Why else would they (crappily) cover the Beatles’ “Taxman”? Yeah, remember the Beatles, who set the Christian world ablaze when John Lennon claimed they were “more popular than Jesus” back in 1966? If Sekulow and his cronies really practiced what they preached, they’d be leading crusades to remove the Fab Four from all streaming platforms, not covering their satanic socialist anthem! Jeez, talk about serving two masters.

Look, in all seriousness, America was founded upon religious freedom, and this country is still a democracy. Nobody should ever be persecuted for their religious beliefs. In fact, making music that honors one’s deity of choice is a generally admirable task. But you’ve got to draw the line somewhere and expose music like the Jay Sekulow Band for what is really is: empty, platitudinous shlock-rock that somehow manages to piss off Christians, atheists, liberals, and conservatives all within the same song. In fact, the hideousness of this music might be the only thing upon which our fractured nation can agree.

When the apostle Paul commissioned the Church in Ephesus to “address one another in psalms and hymns and spiritual songs, singing and making melody to the Lord with your heart,” he didn’t mean like this.