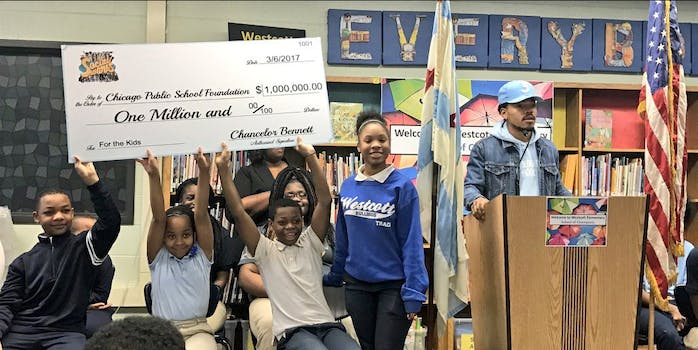 As if we needed it, there’s now one more reason to love Chance the Rapper.

The Grammy winner for best new artist put his money where his mouth is this week and promised $1 million to his hometown of Chicago’s public school system “for arts and enrichment programming.” This news comes days after Chance (real name Chancellor Bennett) met with conservative Illinois Gov. Bruce Rauner about the issue.

The rapper held a press conference at Chicago’s Westcott Elementary School to announce his plan, and addressed his reasoning with a lot more depth than he’s been able to provide via Twitter. For background, in December Rauner vetoed a bill that would have given Chicago’s hugely indebted public schools a $215 million cushion. Without the funds, the public school system has been forced to plan on ending the school year 20 days early, and there is currently no plan in place to stop that from being the case.

“The governor gave me a lot of vague answers in our meeting and since has called me over the weekend,” Chance told the reporters and students gathered in the library. “Our talks were unsuccessful. Gov. Rauner still won’t commit to giving Chicago’s kids a chance without caveats or ultimatums.”

.@chancetherapper announced that he is donating $1 million to Chicago public schools in effort to end a $215 million deficit gap. pic.twitter.com/t88ejsG6Q1

“This isn’t about politics. This isn’t about posturing. Everybody and their mama knows about what’s going on in Chicago,” he continued, referring to the city’s years-long battle against gun violence. In 2016 the city saw more than 762 homicides—more than L.A. and New York’s totals combined. Without proper funding, about 400,000 children will be left out of school for months with no after school programming or childcare of any kind, “possibly put in harm’s way.”

“Do your job,” the rapper demanded. “Give Chicago’s children the resources they need to fulfill their God-given right to learn.”