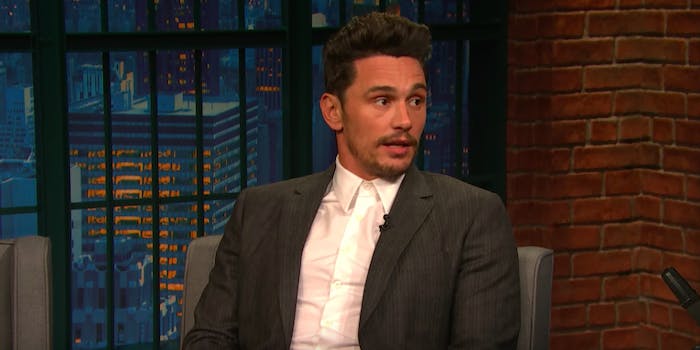 Amid a slew of sexual misconduct reports, James Franco opted out of attending the Critics’ Choice Awards on Thursday night, despite winning best actor in a comedy film for his leading role in The Disaster Artist.

Hey James Franco, now that you have a Golden Globe why don't you give speaking roles that don't require nudity in your upcoming films to the dozens of women who have done full nudity + sex scenes in your indie films and art projects?

Several of these women also accused Franco of misconduct on Twitter after his Golden Globes win on Sunday night. Many found it hypocritical that he wore a “Time’s Up” pin, which represents an initiative dedicated to bringing sexual harassment to light and ending the silence and inaction that women so often face. In a now-deleted tweet, Breakfast Club actress Ally Sheedy wrote, “James Franco just won,” she wrote. “Please never ever ask me why I left the film/tv business.”

Aspiring filmmaker Violet Paley also called out Franco on Twitter, writing, “Cute #TIMESUP pin James Franco. Remember the time you pushed my head down in a car towards your exposed penis & that other time you told my friend to come to your hotel when she was 17? After you had already been caught doing that to a different 17 year old?”

Some Twitter users, however, have taken issue with a tweet Paley posted last September, which reads, “I like planning ways to ruin someone’s life the moment I meet them.” They believe the old tweet undermines Paley’s accusations, which Franco recently told Stephen Colbert were “not accurate.”

“I use Twitter to make jokes most of the time. It was clearly a joke,” Paley told TMZ about the tweet. “I’m sorry if I offended anyone and I think most people know it was a joke and the people milking it are Trump-like bot trolls so I’m not deleting it and letting their psychotic twist on a dumb joke win.”

Despite denying the accusations made against him on Colbert’s show, Franco later told Seth Meyers that he won’t “actively refute” the allegations. He also told the host that he “had a great relationship” with Sheedy, and when asked if he would reach out to the actress personally, Franco replied, “I guess I’m just letting it be.”

“One of the things that I’ve learned is that this is a conversation that obviously needs to be had,” Franco said. “If I have to take a knock because I am not going to try and actively refute things then I will because I believe in [people’s stories being heard] that much.”

Several illuminating passages from Franco’s 2013 novel, Actors Anonymous, have also begun circulating on Twitter. The novel functions as a hybrid of fiction and memoir, compiling tales by anonymous actors—including a chapter by Franco himself in which he details his sexual exploits. “I had something going with most of my female costars and worked up a routine so that I could see someone every night,” he writes.

In another passage, Franco describes the “fucked up” relationship between acting teachers and students. “They get inside their students’ heads. Even if they have the best intentions, they can’t help from becoming gurus and therapists for their students, because they deal on such intimate terms,” he writes. “When you have a bunch of students looking up to you because you have liberated their emotions, it’s hard not to play the role of mentor/lover/father/mother.”