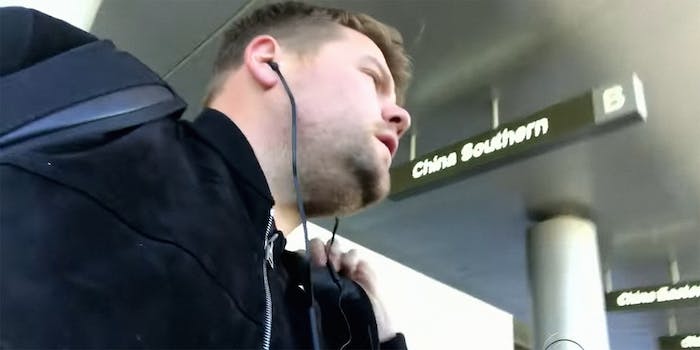 Corden left Los Angeles this week and in the mostly silent clip he walks into the airport, goes through security, has time to eat, and boards his plane without a hitch. It would seem like any other day, although you can spot some protesters before Corden walks into LAX. As a U.K. citizen, he’s legally allowed to work in the U.S. so he has an idea of what one might have to go through in order to become a legal resident.

He didn’t just film it to show off his journey out of LAX. He showed how easy going through the airport is for him as a white Christian man while those affected by the ban—Syrian refugees, some legal residents and dual citizens, and people from those seven Muslim-majority countries—have gone through much worse.

“Freedom of movement should be this easy for all legal immigrants,” the video stated at the end. “Not just the white and Christian ones.”

Corden rarely gets political on The Late Late Show. He might mention current events in his monologues like every host, but he doesn’t do daily analysis like his main late-night rival Seth Meyers and he doesn’t have the contentious softball interview and condemnations like his closest host in tone, Jimmy Fallon. Him taking a stand against Trump’s immigration ban is a quiet but powerful move.