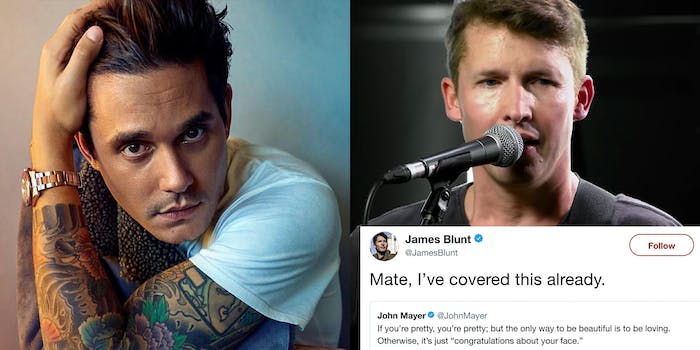 On Monday, the “You’re Beautiful” singer held nothing back after Mayer wandered into his territory like a wide-eyed and foolhardy supplier.

Mayer, who once told Playboy that his penis wasn’t interested in Black women, wrote a patronizing tweet about inner beauty back in October. “If you’re pretty, you’re pretty; but the only way to be beautiful is to be loving. Otherwise, it’s just ‘congratulations about your face,'” the singer of “Your Body Is a Wonderland” joked.

When this tweet was brought to Blunt’s attention, he went for the throat:

If you’re pretty, you’re pretty; but the only way to be beautiful is to be loving. Otherwise, it’s just “congratulations about your face.”

It was another strong tweet in a long line of self-deprecating zingers that have oddly reversed Blunt into the mainstream because, well, people like him.

Quite wet and disappointing? https://t.co/ONT032Pmvk

Mayer, boundlessly talented, has had the opposite career arc over the years: Everyone thinks he’s kind of a jerk, so people write off his work even though it’s more interesting than Blunt’s music. Mayer has admitted that he’s a recovering “egomaniac,” and he told NBC in 2015 that he tries to stay off Twitter. Maybe he should take his own advice.