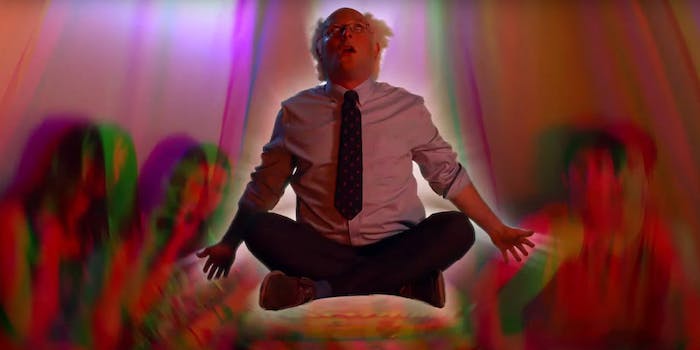 James Adomian and the art of the Bernie Sanders impression

There can be more truth than flattery in imitation.

Comedian James Adomian has surpassed Larry David as the best Bernie Sanders impersonator, something that may have been conceded earlier had his Funny Or Die video—which premiered back in June—or his September @Midnight appearance been circulated with as much virality as his Trump vs. Bernie debate, performed alongside comedian Anthony Atamanuik’s pitch-perfect Donald Trump.

Despite concessions from Salon and Huffington Post, Adomian’s impression is still less popular than David’s. It seems unlikely that Saturday Night Live will have Adomian play the senator on future episodes, but the effects of impersonations of political figures on SNL are measurable and not without consequence.

Adomian is a master impersonator, but if you don’t follow the alternative comedy scene, you might not be too familiar. Perhaps the most mainstream coverage the comedian received was in 2010, when he was a top-ten finalist on NBC’s Last Comic Standing. In 2012, he released his stand-up comedy album, Low Hangin Fruit. In 2014, he starred in David Cross’s directorial debut, Hits. He’s also been a frequent guest on the television series and podcast Comedy Bang! Bang!, as well as other podcasts where you can hear his impersonations of people like Jesse Ventura, Paul Giamatti, Gordon Ramsay, Gary Busey, Tim Gunn, Richard Branson, and even fellow comedians Marc Maron, Louis C.K., Todd Glass, and Andy Kindler. He’s also done esoteric impressions of people like Huell Howser, Dov Charney, Tom Leykis, and Slavoj Žižek. His perfectly executed George W. Bush impression is even better than Will Ferrell’s.

Adomian is adept at capturing the essences of particular people, but nowhere has this been more apparent than in his impression of Sanders.

“There’s a lot of really specific idiosyncrasies about Bernie Sanders, you know, everything from his voice to his mannerisms to his policy positions and vocal patterns and stuff, and the phrases he’ll use,” Adomian told the Daily Dot via phone. “I think there’s a lot of form-specific stuff about the real Bernie Sanders that I’m trying to pay close attention to and sort of make light of in a positive way.”

While Adomian has mastered Sanders’s form—and yes, he purposely uses two disheveled wigs for most iterations—it’s the content and improvisational anecdotes that make Adomian’s Sanders shine. When asked about gun control during his recent Q&A show for Stand Up for Bernie, Adomian’s Sanders explains:

I believe that my position on guns is wrong. And I’ve always believed that. I don’t know why I’m stuck on this position, but here I am. I’m from a state where there’s moose. Sometimes, ya know, it’s not only hunting season, sometimes you gotta get the syrup out of a tree—BAM—you shoot it open. Look, I’m gonna drop it as soon as I can. That’s my position on guns—don’t worry, I’m coming around.

On Harmontown back in May, he mentions that his diet consists solely of oatmeal or porridge, with raisins thrown in on special occasions. He then quips:

Look, a box of raisins in 1970 contained over 40 grapes that were shrunk down to an edible raisin size. Today, over 40 years later, that same box of raisins contains over 20 percent less grapes from farm to plate because of Monsanto and genetically modified organisms, which I will fight to stop in the impossible scenario where I occupy the White House for even two or three weeks before the Pentagon calls a coup d’etat because I am simply unacceptable to anyone with power to be in the Oval Office.

These examples highlight the ways in which Adomian takes observations of Sanders—his conservative position on guns, his use of numbers to illustrate points, and his anti-establishment candidacy—and turns them into smart and subtly flattering comedy. Whereas David impersonates Sanders by basically being himself and reciting lines the SNL staff writes for him, Adomian builds on his perfected Sanders form by imparting a sustained and largely improvisational humor—his perspective melded with Sanders’s—throughout the impression. Adomian often embellishes parts of the senator that aren’t necessarily unflattering to begin with: his candidness, age, or the way he looks or sounds.

“I think if those are the kinds of things you’re making fun of somebody for, they’re in pretty good shape,” Adomian said.

It should come as no surprise that the comedian is a strong supporter of Sanders, not only as a politician but as a performer to crowds across the country. “Maybe the biggest audience I ever performed for was at a music festival… maybe 5,000 [people were there], and he speaks to crowds of 20-30,000 people,” Adomian said. “That’s not easy. …It’s amazing, the idea that you could hit your stride at 74… with such energy that captivates the imagination of a lot of people in the country, in particular young people. …[H]e’s honest and refreshing and he’s a dynamic personality. He’s fun to listen to and he’s compelling.”

For Adomian, Sanders’s ability to communicate complex issues in an accessible way, issues that were off the table his entire life, is what largely drives him to support the senator. “Such a small group of people control half the wealth in the country and there’s something horribly wrong about that,” he said. “No one voted for that and he’s bringing it to the table as a political issue that should be debated and I absolutely support… and salute him for it.”

Based on recent audience reactions to Adomian as Sanders, he thinks there may be an intersection between comedy and Sanders’s appeal. “I think generally… he’s the most popular candidate whenever I perform anywhere,” Adomian explained. In addition to touring the States with the impression, he also gets a warm reception from people in Canada and the United Kingdom. And when he’s done the Trump vs. Bernie shows, the audience consistently boos Trump and cheers for Sanders.

“I don’t know if it’s because he’s popular with young people or people who follow comedy or people who go out and do stuff,” Adomian said, “but when I come out, there’s always an enthusiastic room to get to hear from even a fake Bernie Sanders.”

It’s worth considering how an impression can affect the perception of a candidate. In the seventh season of 30 Rock, an episode influenced by Tina Fey’s impression of Sarah Palin and its reception features Tracy Morgan’s character impersonating an idiotic Republican candidate who happens to look exactly like him. This impression becomes a struggle for TGS (the show’s fictional SNL-like sketch series) because the real governor’s favorability increases alongside the airing of Jordan’s impression.

Indeed, the “Fey Effect” has been studied by researchers who concluded that her impression negatively influenced the perception of Palin, especially among Republicans. As Andrew O’Hehir writes, Fey and her writers “understood that it wasn’t necessary to exaggerate or ridicule anything about Palin, but only to distill her in purest form. That performance was not satire; it was adoration.”

And while both Fey and Adomian lend a bit of exaggeration to their respective impressions, they embellish just enough to allow you to imagine the real figures speaking or explaining things in their particular way. If you’re paying enough attention to an impression, you can glean more truth about the figure being represented. For Palin, it’s her inanity and lack of experience; for Sanders, it’s his staunch anti-establishment views and unapologetic democratic socialism. At times, there can be more truth than flattery in imitation.

This is what separates Adomian’s impression from David’s: the purity of the distillation. David’s SNL impression is a result of someone noticing David and Sanders have a similar voice while Adomian’s is the result of months of attention to details. David made a career out of transforming the mundane into comedic fodder, but he’s not really an impersonator of anyone but himself. Adomian spent a lifetime studying people around him; he recognizes how others perceive/are perceived and plays to an audience’s knowledge and preconceived notions.

My Bernie Sanders impression gets almost as thorough a media blackout as the actual @BernieSanders. https://t.co/HeJUnYBw79

Although Adomian’s impression receives less coverage than mainstream comedians, “The Bernie Sanders of Bernie Sanders impersonators” is a role the comedian would surely relish.

“I think he should have me join him for campaign events,” Adomian said when asked what the senator needs to work on. “I think his campaign should realize how many comedians love him and do more comedy fundraiser events.”

Screengrab via Funny Or Die/YouTube | Remix by Max Fleishman