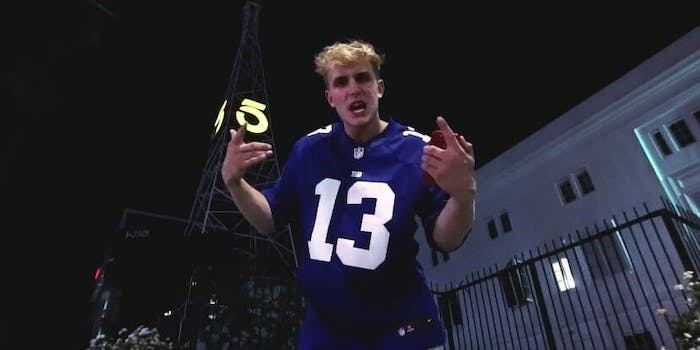 He responds the only way he knows how.

It’s been a rough couple of weeks for YouTube star Jake Paul. His neighbors are contemplating a class-action lawsuit against him because they say he’s a public nuisance. His Disney Channel show recently dropped him. And the internet dragged him for his recent racist comments to a fan.

Now, Paul has responded the only way he knows how—by making a YouTube video. This time, though, Paul has created a music video that he’s calling a diss track (though he also says it’s not a diss track but instead is “a message to all the hate and news.”)

Wrote Paul on YouTube: “Nobody knows the truth except for people that know me. You can hate on me all you want but I’m not going anywhere and the light in me will also shine through all the lies. I’m sorry for the mistakes I’ve made and the dumb things I’ve said, but we’re all human, and humans deserve forgiveness. Love y’all. Cya tomorrow!! Peaceeee!!”

Here’s the video in its entirety where Paul highlights his charity work and reminisces about the times he stood up to high school bullies.