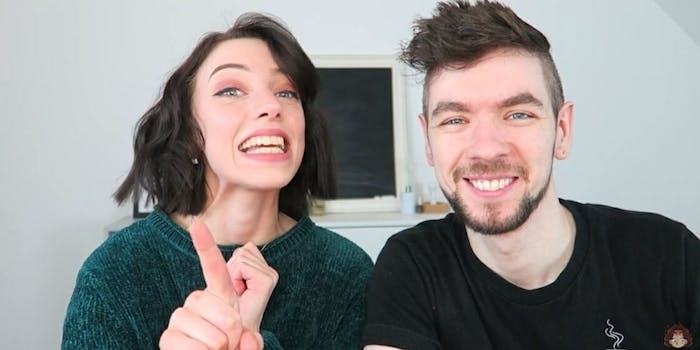 'It hurts a lot to leave someone you love.'

Mega-popular YouTube star Jacksepticeye and his longtime girlfriend, Wiishu, have broken up, the two have confirmed. And unlike other YouTube couples, they haven’t posted a video about it.

Instead, both of them simply posted to social media on Tuesday, saying they had split up a few months ago and that they were trying to work through the pain.

Jacksepticeye, who has 20.5 million subscribers on his gaming channel and whose real name is Sean McLoughlin, briefly wrote about the end of his relationship with Wiishu—whose real name is Signe Hansen. “It’s hard for me to say this, but a couple months ago, Signe and I went our separate ways,” he wrote. “This was not an easy decision to make. Sometimes people change and life moves on in different directions. We would really appreciate respect and privacy on this topic moving forward and not gossip or spread rumors.”

In her own statement, Hansen, who has more than 455,000 subscribers on her channel, wrote that it took her a long time to address the rumors of the couple’s demise because “it hurts a lot to leave someone you love, and I was in a lot of emotional pain.” She also lamented the fact that some have used her as a “scapegoat” for why the relationship ended and how that’s unfair. “I’ve been very supportive of Sean as well as the decision to break it off,” she wrote.

Twitter also seems to be taking the news of the breakup badly, with fans saddened.

Oh my god Seán I’m so sorry this happened. It really breaks my heart to see this but I hope u two are friends at least

She’s strong as fuck, and I think if everyone knew the shit she’s been through they’d respect her as much as I do

I'm sorry to hear you're hurting. :(
All the love and support to both of you. I wholeheartedly wish you the best moving forward.

Signe, I just want you to know that I will continue to support you, no matter what.
You're such a lovely person with a kind heart and someone I just look up to and admire a whole lot. You're so strong, you'll make it through. I love you. ❤

Hansen, though, is trying to remain optimistic—even though their 3-year-long relationship is finished.

“Whatever the aftermath of this might be, I will continue doing my own thing and trying my very best to create content for you guys even if it’s going to have to be in different surroundings,” she wrote. “I am moving on and away from this and I urge you guys to do the same.”