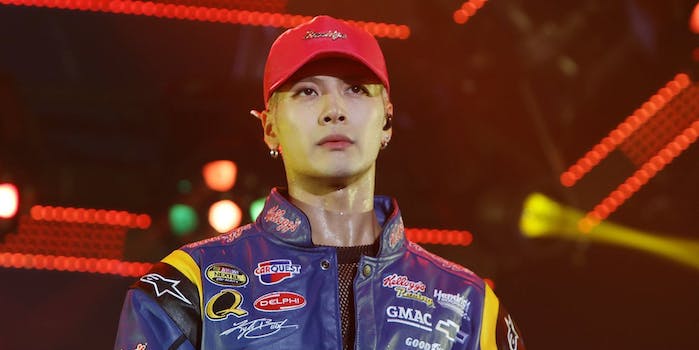 GOT7’s Jackson Wang injured after stalkers chase down his car

The stalking problem in Korea is not getting any better.

Jackson Wang, a member of popular K-pop band GOT7, was injured in a car accident on his way to the airport on Thursday.

Wang was escorted away by a staff member, but not before witnesses snapped pictures of him holding his back. Some also reported that Wang went to the car and asked the passengers if they were OK.

Sasaeng fans already crossed the line!! THEY'RE FVCKING OUT OF THEIR MINDS!! #GetWellSoonJackson pic.twitter.com/CykGMthI8g

GOT7’s label, JYP Entertainment, released an official statement via the band’s Weibo account not long after the incident, pleading with fans to stop the behavior.

Fans who stalk idols repeatedly are known as “sasaeng” in South Korea, an issue that has run rampant there for years. Despite breaking into idols’ homes, following them in the streets, and stealing their phone numbers, sasaeng are rarely prosecuted. A law against stalking passed earlier this year that upped the fine to $17,000 and up to two years of jail time, but the problems continue. Girl group Mamamoo and Girls Generation soloist Taeyeon have also been targeted this year.