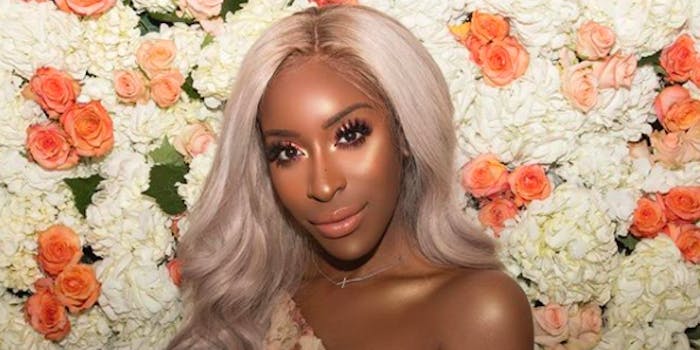 She said darker-skinned women are often excluded from brands and products.

Jackie Aina, a beauty YouTuber with more than 2 million subscribers, is known for giving her brutally honest opinions about makeup products and brands. In her latest video, Aina addresses issues of colorism in the beauty industry and makeup community—as well as the struggles of being a darker-skinned beauty vlogger.

In the 13-minute video, Aina slams the perspective of “not seeing color” and how darker-skinned women–and men—are often excluded from certain products or brands due to lack of diverse shade ranges.

“I’ve experienced a lot of messed up things, being not only a (former) makeup artist, but a beauty vlogger,” Aina said in the video. “But I’m tired. You have makeup brands that will launch twenty shades of beige and everything in between… but then throw in two dark shades like, ‘Here, just to shut y’all up’.”

Aina said that despite some people trying to avoid “seeing color,” color and skin tone play crucial roles in the beauty industry when it comes to matching makeup shades. She said since she first started her Youtube channel nearly 10 years ago, her goal has always been to disprove any notion about what makeup “works” or “doesn’t work” for darker-skinned women.

Aina said brands either fail to produce makeup products for darker-skinned people, or that when they do, they often make no effort to reach out or send the products to Black YouTubers for reviews.

“I don’t think people really understand what it feels likes to not be seen,” Aina said. “I’m sick and tired of seeing people who look like me get stepped on. If we celebrated each other’s differences instead of pretending like they aren’t there, we could get a lot more accomplished.”

On Twitter, Aina’s followers praised her for speaking out about colorism in the makeup community.

This video was NEEDED. Extremely and utterly NEEDED. pic.twitter.com/ZLu5ZVfneS

Aunt Jackie…if you wanted my wig, all you had to do was ask. You didn’t have to snatch it like this. pic.twitter.com/3l2MLN2TjS