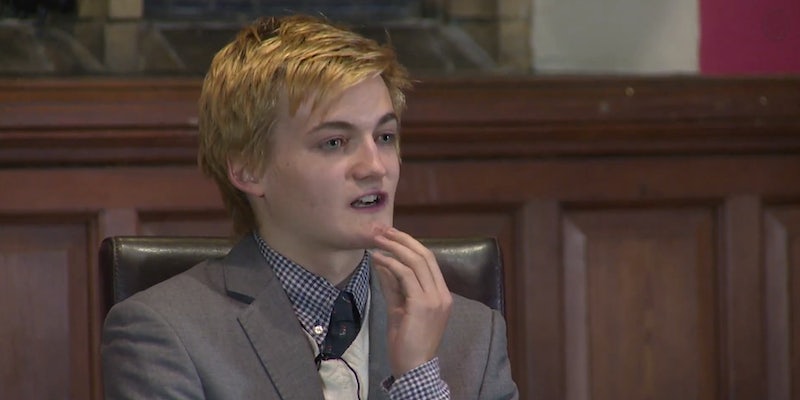 Jack Gleeson, a.k.a. Game of Thrones’ sociopathic boy king, has a few thoughts about being thrust into the limelight.

There is, perhaps, no one who hates celebrity culture more than the celebrities stuck in the midst of it. And Jack Gleeson—best known as playing sociopathic boy king Joffrey Baratheon in Game of Thrones—has had more than a few thoughts since he was thrust into the limelight.

The 21-year-old actor was invited to speak at the Oxford Union, Oxford’s debating society, for a Q&A session back in November, but he found that he couldn’t talk about himself or Game of Thrones for an hour.

According to Gleeson himself, all he’s done to deserve the honor of speaking at the Oxford Union is “act in a TV show and pretend to be mean… for money.”

Instead, he decided to hijack the conversation and read an essay he wrote the night before. As one redditor put it, Gleeson “just fucking filibustere[d] his own Q and A.”

Gleeson is clearly nervous as he starts speaking, but soon enough his argument counters any bout of nerves. He’s a scholar of theology and philosophy at Trinity College Dublin, and his speech is well-researched and well-cited.

Gleeson originally dreamed of being a famous actor and loved the idea of being able to move an audience through a performance, but when he finally achieved fame at age 17 (something he nor much of the Game of Thrones cast had expected), he found it wasn’t something he actually wanted. People stopped him on the street for photographs, he got invited to a lot of events, and his jokes seemed be more fun “among certain groups of my peers.”

“It was an atmosphere from which I instantly wanted to retreat,” he explains. “I detested the superficial elevation and commodification of it all, juxtaposed with the grotesque self-involvement it would sometimes draw out in me.”

Gleeson really gets started around the 7:30 mark, when he starts spouting off his observations on celebrity worship and the science and mentality surrounding it.

“It’s not just a weird societal quirk,” Gleeson says. “It’s indicative of a complete dissolution of the self in favor of another, which can be seen as almost a direct translation of a religious hysteria.”

Game of Thrones is already Gleeson’s swan song; the actor said in November that he would quit acting after his time on the show has ended.

And after seeing just how Gleeson feels about celebrity culture, the following Q&A session feels ironic in comparison.