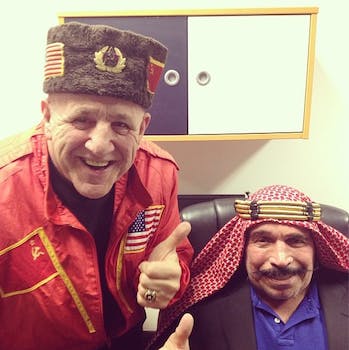 Prepare to be humbled by the Iron Sheik on Vine

The Iron Sheik is an Internet phenomenon, and his Vine account doesn't disappoint.

Former WWF champion the Iron Sheik is an Internet phenomenon.

His forthright comments on Twitter helped him lock down a healthy band of more than 277,000 followers. The Iron Sheik’s frequent attacks on Hulk Hogan, Chris Brown, Jose Canseco, and Zach Braff (among many others) in stylized, somewhat broken English have endeared him to fans old and new.

Now, Sheikie, as he calls himself, is all over Twitter’s video-sharing app Vine.

The 70-year-old’s first Vine appeared Friday, just as Wrestlemania weekend was getting into full swing. He’s already shared 30 videos and has almost 1,400 followers. Judging by his Vines, he’s every bit the type of character he projects on his Twitter account.

Let’s take a look at how Sheikie learned to use Vine, catching up with old friends as performers and fans descended on New Jersey for the biggest wrestling show of the year. (Warning: some NSFW language ahead.)

Sheikie’s first few posts were shot in a hotel room. He really seems to hate Hulk Hogan, and is enthusiastic about cutlery and condiments.

He tried his hand at a #weirdvine.

Sheikie is a believer in personal grooming.

Sheikie is a Gatorade drinker. So there’s that.

He appeared at a convention. One fan seemed really happy to meet the legend.

Sheikie managed to catch up with some old pals over the weekend. Former tag-team partner Nikolai Volkoff, iconic wrestler Bret “The Hitman” Hart, and Marty Jannetty were among those the Sheik ran into.

It wasn’t all fun and games for the Sheik this weekend. Just you try running a 7-Eleven with no beer.