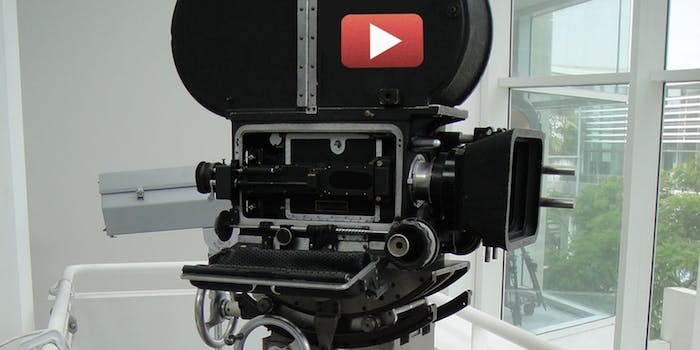 In the past year alone, the flexible service has powered a number of high-profile campaigns as well as thousands of smaller projects.

YouTube content creators who wish to crowdfund their own projects have several options, but recently, many of them have turned exclusively to Indiegogo. In the past year alone, the flexible service has powered a number of high-profile campaigns as well as thousands of smaller projects, some of which we feature in our Fund This column.

At the center of Indiegogo’s growth stands Marc Hofstatter, the company’s Head of Film and Digital. Hofstatter came to Indiegogo a year ago and has been instrumental in connecting Indiegogo to the cash-hungry YouTube creators who wish to fund their own projects. With his help, Indiegogo has developed a strong connection with the online video community, and those ties are only getting stronger: The company’s latest hire is Rebecca Lando, a former YouTube Next Lab and YouTube Spaces employee. She comes to Indiegogo from Nerdist, where she managed the studio’s YouTube network.

We decided to take a closer look at Indiegogo’s YouTube-related work. Here’s our conversation with Hofstatter:

Tubefilter: What do you think has been the single biggest catalyst that has led to Indiegogo’s growing appeal within the YouTube community?

Marc Hofstatter: The greatest catalyst for Indiegogo’s appeal to the YouTube community is that we hold a lot of the same benefits that YouTube does, as we are an open platform. We’ve always encouraged diversity and we give people the platform to pursue what matters to them in a way that can change their lives.

TF: Does the influx of high-profile Indiegogo campaigns help, hinder, or have no effect on the smaller creators looking to fund their own projects?

MH: Some people worry that big name talent coming to Indiegogo to raise funds will take attention away from the “little guy.” We’ve found that it’s quite the opposite. When fans of PewDiePie, Wil Wheaton, Rooster Teeth or Freddie Wong come to Indiegogo to support those creators, they don’t just contribute to campaigns and leave, they stick around and see what other projects may excite them. Ultimately, if you’re good at what you do, if you create something awesome, and if you plan and put in the work for your campaign, you will find your crowd.

TF: What do you think the average Indiegogo user looks like, and how does the site cater to this person?

MH: The average Indiegogo user is progressive, conscious, creative and adventurous–they’re always looking for a reason to say “yes!” Our open platform enables us to link these contributors up with the amazing, perhaps even unconventional, ideas they are most passionate about and inspired by every day.

TF: On a similar note, how much of the Indiegogo user base consists of web video creators? Is that the site’s most active category?

MH: Film and video were where we started when the platform launched at Sundance in 2008. They remain a vital part of what we do as a company and are two of our biggest categories. As the YouTube and web video communities grow, so does our own community of creators.

TF: When you look at crowdfunding projects, what qualities set the successful campaigns apart from those that don’t live up to expectations?

MH: In order to truly succeed on Indiegogo, it’s important to be prepared for and thoughtful about your campaign. Just as a creator would be sure to put a strategy in place when putting a video up on YouTube, we often see people take months to prepare and build out their projects on Indiegogo. It’s those campaigners, who take the time to obtain early feedback and engage their userbases, who ultimately go on to have the most success.

TF: Do you see Kickstarter as a close competitor, or would you say that Indiegogo appeals to a completely different type of crowdfunder?

MH: Indiegogo launched in 2008, before the word “crowdfunding” even existed and today, there are more than a thousand crowdfunding platforms in the world. Even still, we remain the largest, most open and most global platform with about one-third of our contributions coming from overseas. Since no two campaigns are ever quite the same, we also offer two funding options, so people can choose whichever works best for them. These are Fixed Funding, where campaigners don’t receive funds if the goal isn’t reached, and Flexible Funding, where campaigners keep all of the money they raise regardless of whether the  goal is met.

Indiegogo Outpost is another unique feature that our customers love. This is our embeddable campaign widget which allows campaigners to tailor the look, feel and location of their campaign page. This means that fans can contribute to a campaign without leaving their own branded site, while still enjoying the benefits of Indiegogo’s platform amplification. No other crowfunding platform can offer that.

TF: Do you think the Indiegogo model has any particular weaknesses that you would like to improve?

MH: Indiegogo has definitely grown and changed since we officially launched nearly six years ago. The site’s look, its functionality, and its usage have all changed in that time. The platform will continue to adapt in a continuous effort to meet and exceed the expectations of creators. Our most recent example is our iOS app release, that allows for optimized campaigning and contributing on-the-go.

TF: As Indiegogo continues to grow, what other features do you hope to offer?

MH: We are always asking for and getting feedback from the community, so there are quite a few exciting projects in the pipeline–many of which will directly appeal to YouTube and web content creators and how they fund their projects. Another development that we are working on is our Android app, which is in the works and will be released in the near future.

TF: What kind of growth have you seen with the YouTube community on Indiegogo over the last year?

MH: In the last year alone Indiegogo has seen more than a 60% increase in money contributed to web/video projects with more than 29 YouTube creators, including Wil Wheaton and The Young Turks, receiving funding to the tune of more than $7 million on Indiegogo. As part of this, we have also empowered creators to tap into their powerfully passionate communities and further extend their projects beyond core YouTube content with campaigns such as PewDiePie’s 25 Million Bros Strong Charity Drive for Save the Children, Hank Green’s Project for Awesome and most recently Rooster Teeth’s Lazer Team, which will bring them from short-form web content to their first-ever feature film. Rooster Teeth ended up raising $2,480,259, over 382% of their original funding goal, and became the most funded film on Indiegogo.

TF: What are some surprising things that someone may not know about the YouTube community on Indiegogo?

MH: There was a conscious decision on our part to use YouTube in our video player rather than create our own. We wanted to take the same ease of sharing and accessibility that exists on YouTube.com and use it to help campaigners thrive on Indiegogo.com. In fact, many of the same qualities that make a YouTube video go viral are the same as those that will take an Indiegogo campaign to the next level.

TF: What are some of your more high profile web content campaigns and successes?

MH: Many of the most well-respected and closely followed YouTubers have taken to Indiegogo to fund their dreams, including Hannah Hart who was an early user of the platform. More recently we’ve seen a swell of web series records being made and then broken by campaigners such as Freddie Wong and Geek & Sundry respectively, the latter raising more than $1.4 million for a third season of TableTop. This month, the popular UK-based YouTube channel Simon’s Cat raised $522,349 to fund their first ever long-form color animation–their campaign ended up breaking the record for most crowdfunded film or video ever out of the UK.

TF: Finally, how do you see crowdfunding evolving? In the future, what do you think the crowdfunding landscape will look like, and how will Indiegogo adapt to any changes?

MH: We’re always gathering feedback to optimize Indiegogo and have been since day one. In the future, crowdfunding will become even more streamlined to make it easier than ever to fund campaigns, distribute content and fulfill perks. The market is getting increasingly crowded, so campaigns have to find new ways to stand out among other projects–tools such as Indiegogo Outpost will empower campaigners rise above the “noise” and reach their audience in a customized and authentic way.