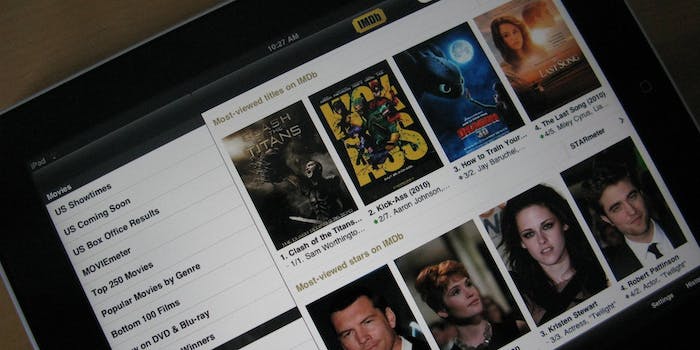 Actors can now request to have their ages removed from IMDb

It's designed to help prevent ageism in Hollywood.

Actors who wish to have their ages removed from subscription-based entertainment databases now have the ability to do so, thanks to a new California law.

The legislation, which California Gov. Jerry Brown signed on Saturday, requires those websites, such as IMDb, to remove the ages of an actor within five days of receiving a request. Supported by SAG-AFTRA, it’s designed as a way to prevent age-based discrimination against actors and actresses by Hollywood executives who may refuse to even consider someone for a role after seeing their age.

“SAG-AFTRA has been working hard for years to stop the career damage caused by the publication of performers’ dates of birth on online subscription websites used for casting like IMDb and StudioSystem,” SAG-AFTRA said in a statement. “Currently, many websites used for casting proactively present birthdates and ages to casting decision makers who often can’t avoid seeing this information even if they try. This law will help improve the working lives of all SAG-AFTRA members and aspiring performers.”

Critics of the bill argue that removing accurate information such as age from a website “suppresses free speech.”

The new law comes more than three years after actress Huong Hoang lost a lawsuit against IMDb for posting her age on its website.

Some of Hollywood’s biggest names have spoken out about ageism in recent years. Maggie Gyllenhaal was told at age 37 that she “was too old to play the lover of a man who was 55.” Anne Hathaway, 32, has already started to notice the effects of a system she once benefited from. At 28, Olivia Wilde was considered too old to play 38-year-old Leonardo DiCaprio’s wife in The Wolf of Wall Street; the role went to Margot Robbie, who was 22 at the time and was believed to be lying about her age earlier this year before it was debunked. And Hollywood’s ageism is never more evident in its tradition of casting moms who aren’t that much older than the actors playing their kids. (Amy Poehler was famously only seven years older than her movie daughter Rachel McAdams in Mean Girls.)