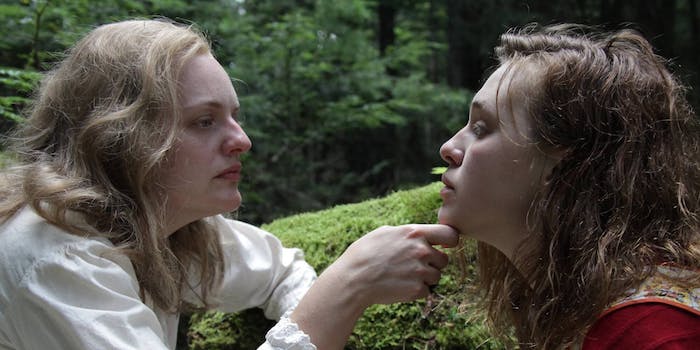 Review: ‘Shirley’ is more like a psychological thriller than a traditional biopic

Directed by Josephine Decker (Madeline’s Madeline), Shirley is a snapshot from the life of horror novelist Shirley Jackson, the kind of eccentric and troubled artist who is absolute catnip for biopic filmmakers. Fortunately, this is not a traditional biopic.

RELEASE DATE: June 5, 2020
DIRECTOR: Josephine Decker
STREAMING: Hulu
Elisabeth Moss plays the iconic horror writer Shirley Jackson in this tense psychological drama. Instead of being a traditional biopic, it focuses on the conflicted relationship between Jackson, her husband, and a pair of naive young houseguests.

Taking place after the release of her career-defining short story The Lottery in 1948, the film explores the conflicted relationship between Shirley (Elisabeth Moss), her husband Stanley Hyman (Michael Stuhlbarg), and a young couple who come to stay at their house. Screenwriter Sarah Gubbins based her screenplay on a novel by Susan Scarf Merrell, making this a more obvious fictionalization than most films about real historical figures.

Rose Nemser (Odessa Young) is our entry point into Shirley Jackson’s tormented life, reluctantly becoming the Jacksons’ unpaid housekeeper while her husband Fred (Logan Lerman) works as Stanley’s TA. While not as famous as his wife, Stanley Hyman was a renowned literary critic at the time. Stuhlbarg plays him as a very recognizable kind of bohemian academic: lively and charismatic during small doses in the classroom or at faculty parties, but sleazy and unpleasant in private. Think of him as the malevolent version of Stuhlbarg’s intellectual dad in Call Me By Your Name, cementing his status as a beloved character actor. Stanley openly cheats on Shirley with his own students, but also deeply admires her writing, supporting her through long bouts of agoraphobia and self-loathing. A complicated relationship that Rose— young, pregnant, and naive—can’t hope to understand.

With dowdy clothes and some subtle nods toward Jackson’s real physical characteristics, Elisabeth Moss suffers slightly from Biopic Actor Syndrome—doing an impression of someone whose real-life mannerisms or appearance won’t actually be recognizable to most viewers. But it’s Elisabeth Moss, so of course, it’s far more compelling than the latest “Benedict Cumberbatch, Misunderstood Genius” movie.

Moss specializes in tense, claustrophobic thrillers about women being oppressed by men and societal expectations. Here, we sympathize with Shirley Jackson’s position as an outcast, constantly second-guessing her own talent while remaining confident in its dark, disturbing themes—the very thing that alienates the more conservative world of her husband’s colleagues, a gaggle of 1950s college professors. Her affinity for horror made her an iconic figure, but in her own hometown she’s viewed almost like a witch—not helped by her inability to go outdoors or conform to conventional beauty standards. For much of the film, she remains inside the house, alternately working on her next novel (Hangsaman) and torturing Rose with grueling tasks and pithy insults. At first, Rose is terrified by Shirley’s insightfully cruel behavior. Later, she begins to find it fascinating. In the first couple of scenes we already see the first signs of Rose having a darker side beneath her innocent exterior, visibly turned on by reading The Lottery. (Later generations of high school English students might be surprised to learn how controversial and titillating this story was at the time.)

Full of moody, sensual close-ups of the two female leads, Shirley builds tension as a portrait of two very different marriages, and of Shirley Jackson’s conflicted internal life. Exhausted and isolated, she’s prone to exercising her pain on others, usually with zero remorse as she needles Rose into fleeing the room in tears. Stanley, similarly callous, finds this behavior entertaining, but is frequently just as cruel himself. They understand each other, but it’s not a happy marriage between two sadistic soulmates. They share a unique mutual understanding, yet they frequently harm each other in the process.

Logan Lerman’s Fred is basically a nonentity in this little four-person drama, only somewhat intentionally. He plays a bland, privileged young academic who doesn’t notice his wife’s hidden depths. Not exactly an interesting role, but he’s also not a very interesting actor. The real highlights here are obviously Moss and Stuhlbarg, a pair of seasoned pros who clearly relish the specificity of their characters, dancing around each other in the musty gloom of their (metaphorically haunted) house. A jagged, jazzy, horror-tinged score by Tamar-kali adds some extra edge to their confrontations, but I was left thinking that Shirley should have leaned even further into the dread and weirdness. Rose provides a familiar kind of framing device, a conventional everywoman who introduces the audience to a tormented eccentric. It might have been better to see more of this story from Shirley Jackson’s own perspective.

Shirley is available on Hulu and VOD June 5.