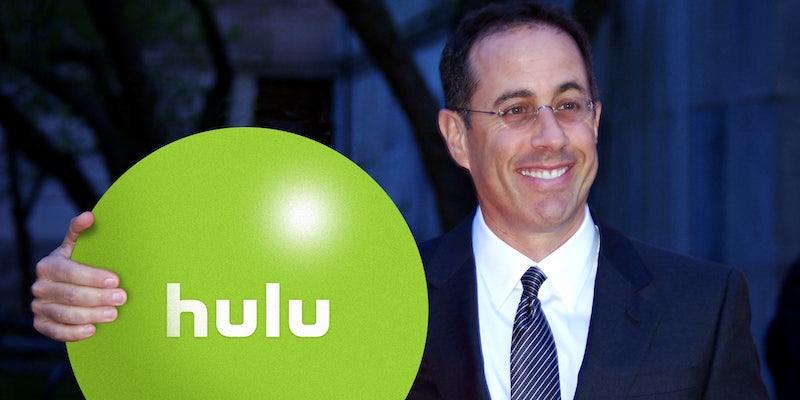 ‘Seinfeld’ goes to Hulu for a massive $180 million

'Seinfeld' finally leaves the auctioning block and allows fans to binge until their eyes bleed.

After a few months on the auction block, the streaming rights to the Seinfeld library have finally been sold by Sony TV to Hulu, which is expected to start streaming the show in June, for an estimated $875,000 an episode. That puts the total price tag at $160 million, with a good portion of that going to Jerry Seinfeld and Larry David, who could have never predicted while Seinfeld was airing that they’d see millions of dollars someday from some strange concept called “SVOD.”

The Hulu deal went through after Netflix famously passed on the show, a move largely seen as perplexing after their Friends purchase proved very successful for the company.

The Daily Dot’s Ben Branstetter speculated that Netflix passed on the show due to its lack of binge-watching value, with its revolutionary “show about nothing” concept shooting itself in the foot, for streaming purposes, by having a plot that didn’t really move forward like that of Friends (however subtly) over the course of its nine seasons. Citing the fact that Sony’s own streaming service, Crackle, offered random Seinfeld episodes for streaming in no particular order, Branstetter observed that

“With few exceptions, you could watch all 180 episodes of Seinfeld on shuffle and it likely wouldn’t matter.”

Others have speculated that Seinfeld probably wouldn’t connect as well with the millennial demographic that gave Friends such a powerful second life on Netflix, which is probably true: Evidence of the millennial view of Seinfeld can be observed in the outrage created when Tumblr decided to deck itself out in the show’s aesthetic to celebrate its fictional (but observed by many fans in real life) holiday of Festivus. Basically: The Tumblr youths lost their minds when the service’s logo reflected that of Seinfeld‘s for one freaking day.

Hulu, on the other hand, has already shown that it couldn’t care less if the millennial crowd didn’t love its back catalog: In February, it purchased the rights from CBS to air CSI, and its over-300 previous episodes, and things really don’t get more “dad show” than CSI.

There’s still another possible explanation for why Netflix passed on Seinfeld and Hulu didn’t: It may have just been, as Puff Daddy would say, “all about the Benjamins.”

While it was widely speculated that Netflix had paid a similar amount for Friends to what Sony TV was offering Seinfeld up for, the total that Hulu ended up paying was quite a bit larger than that estimate. Netflix paid about $500,000 an episode for Friends, with a total for the catalog being around $118 million; when compared to the previously mentioned  $875,000 per episode ponied up by Hulu, with a $160 million total, it’s possible that Sony TV was just asking for a lot more money for Seinfeld than most analysts had estimated, and Netflix just found it financially prudent to bow out of the auction.

Hulu’s deal with Sony TV is a five-year commitment, so don’t expect to find Seinfeld streaming anywhere else (legally) for quite some time. Seinfeld is a pretty sweet thing to have exclusive rights to, and when you compare the costs of a monthly Hulu subscription with those of Seinfeld and and CSI Blu-ray box sets, maybe the streaming service has a good strategy going: It’s got a great hold on content airing on major networks, and by picking up the back catalogs of what some may deem as being “dad shows,” the company seems quite aware—with Hulu shipping pre-installed, and easy to use on most new smart TVs—that not all cord-cutters are millennials.

When you think about it, the occasional random old episode of Seinfeld or CSI fits in quite nicely with what Hulu already does: It actually makes the service feel very familiar to basic cable subscriptions—but a whole lot cheaper. By acquiring Seinfeld, Hulu is close to perfecting its niche (which is different than Netflix’s): Being the streaming service that replaces your Comcast subscription.