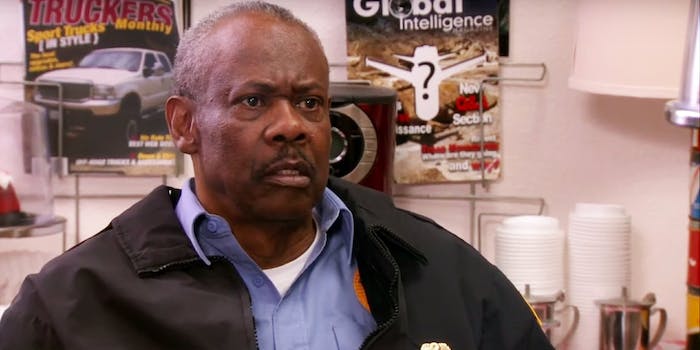 The Office actor Hugh Dane has died, according to a flyer shared on Facebook by the Los Angeles Inner City Cultural Center.

Dane, who’s best remembered as Dunder Mifflin’s security guard Hank, was 75. He died on May 16. His cause of death has not yet been revealed.

Posted by The Los Angeles Inner City Cultural Center on Saturday, May 26, 2018

The Office creators compiled a video of Dane’s most iconic scenes on the TV show, which include his run-ins with Dwight Schrute, following the ridiculous orders of Michael Scott, and sitting at his post on the ground floor of the beloved Dunder Mifflin.

Dane’s co-stars from The Office took a moment to commemorate his life on Twitter.

“RIP Hugh Dane, aka Hank the security guard,” Rainn Wilson, who played Dwight Schrute, tweeted. “He was one of the greats. So kind, funny, talented. We will all miss him.”

“Hugh Dane was one the funniest actors ever,” Kaling wrote. “I loved writing and acting with him.”

RIP Hugh Dane, aka Hank the security guard. He was one of the greats. So kind, funny, talented. We will all miss him. Donations can be made in his name to: https://t.co/z1SAqamWMM pic.twitter.com/ysevEZKOjy

What a terrific guy. https://t.co/kkhalcgttq

Hugh Dane was one the funniest actors ever. I loved writing and acting with him. ❤️ https://t.co/kOlcofYxIn

Fans of Dane also tweeted about him, as well.

Actor Hugh Dane was more than a security guard on #TheOffice. His career spanned for decades & included features in shows like Fresh Prince, Martin, Roc, Friends, & many others. Rest In Peace!

Tonight I’m gonna be listening to the blues album Hank tried to auction off in that one episode. 💔 https://t.co/xgMI8bVlLe

💕💕R.I.P. Hugh. “Hank the security guard” messing with everyone while picking what to do with the surplus is gold and my fave scene of that episode. https://t.co/gjkhFurLvm

RIP to Hugh Dane, aka the best damn security guard ever, aka Hank. May whatever is next be full of joy pic.twitter.com/6ZK6Y48PmG

AKA the greatest security gaurd in all of Dunder Mifflin history

May your blues CD’s sell by the millions and your socks be put on in peace ❤️ pic.twitter.com/2Gr4pq4M7r

Hugh Dane was responsible for Will’s clean box fade before he went out there and gave Marcus Stokes hell pic.twitter.com/hmRqY2VVNC

RIP Hugh Dane. He was in some of my favorite shows. Unforgettable moments like the Fresh Prince pool hall episode (he played like 2-3 characters on that show. Ha) or his most famous role as Hank in The Office. pic.twitter.com/hA6Itbus7A

Saddened to hear this news. We were blessed to have #HughDane bless the set of #TheMayor twice. He was a JOY to work with. Gutted by this news. 😔❤
https://t.co/iMm67QobdF

Aside from The Office, Dane appeared in a multitude of iconic sitcoms and comedies, including The Fresh Prince of Bel-Air, Boy Meets World, Sister Sister, Bridesmaids, Wet Hot American Summer: First Day of Camp, and Girl Meets World.