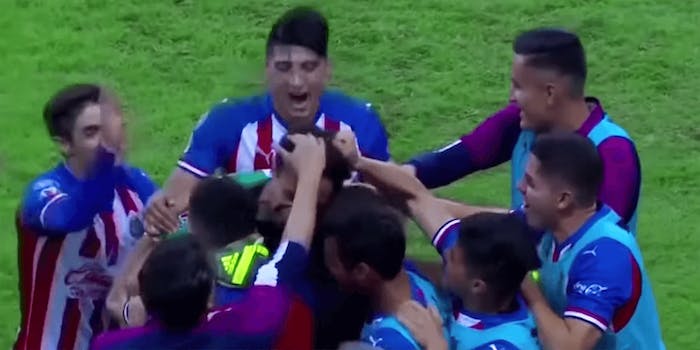 How to stream Guadalajara vs. Cruz Azul live

Here’s everything you need to know to stream CD Guadalajara vs. Cruz Azul live on Saturday.

Two of Mexico’s biggest clubs face off on Saturday night, when Cruz Azul travels to Guadalajara to take on Chivas.  Chivas’ trio of young forwards, brought in this January, have their club right in the thick of the Liguilla race, and points are needed in these two weeks before the visit to league leaders León on March 1. Cruz Azul has surprisingly scored the fourth-most goals this Clausura, but have allowed 8 goals in 5 games.

The match is on Chivas TV; this streaming service provides fans the opportunity to watch Chivas de Guadalajara matches throughout the season.

Chivas TV is the club’s personal streaming service, which allows streamers to watch all men’s home games, as well as exclusive content and interviews with players and staff for Chivas’ men’s, women’s and youth teams. The service is priced at $6.99 per month for a single package.

The club reached an exclusive broadcast deal in the USA to show all home games in Clausura 2020 on Chivas TV.

The Super Clasico this season will be held in Guadalajara, which means soccer fans of all clubs should look into the service to watch one of the biggest games in the Americas.

CD Guadalajara (last five games: LDDDW)are just one point off the eighth playoff spot, and for now, just need to focus on keeping pace. Clubs would normally expect three points at home, but given the circumstances, a draw is not a disaster for manager Luis Fernando Tena. The primary objective is to continue to integrate the club’s young players, and stay in the playoff race long enough to make a push in the last five games of the Clausura.

Cruz Azul (last five games: WDWLL) continues to ride the wave of the emergence of one of El Tri’s future stars, 21-year-old attacking midfielder Roberto Alvarado. Even if you’re not a Mexico fan, this is a name soccer fans will come to know over the next few cycles, and he will carry Cruz Azul as far as they can go this year. Uruguayan manager Robert Siboldi missed the playoffs in his first season last Apertura, and with the club currently in Liguilla position, this will prove to be a crucial season for the Mexico City club.

Chivas have slightly better home odds at +150, with Cruz Azul at +190 and a tie at +215, according to DraftKings Sportsbook.