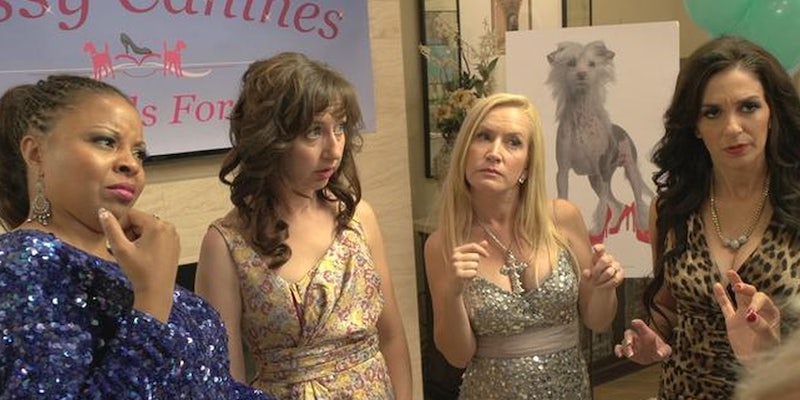 The show focuses on women living just outside the Magic Kingdom, as real-world versions of Disney princesses.

At this point in reality TV culture, the Real Housewives franchise has become a new kind of soap opera, one removed from the gauzy plotlines of soaps past and focused instead on the instant escalation of drama. But the show is also built on a subtle humor, beyond the physical comedy of table-flipping and weave-pulling.

Danielle Schneider and Dannah Phirman watch a lot of Real Housewives. Their new original Hulu series, The Hotwives of Orlando, debuts on July 15, and focuses on women living just outside the Magic Kingdom, as real-world versions of Disney princesses (though they can’t actually say Disney). The show has its roots in the breeding ground of UCB Theatre, and co-star Casey Wilson (Happy Endings) used to hold staged readings of Housewives scenes at the L.A. theatre. However, Hotwives is its own entity.

“I’m a huge Housewives fan,” says Schneider, who was also involved in the UCB readings. “I’ve watched it since the OG OC series, and [executive producer] Paul Scheer came to us and said, ‘This would be a really funny show, and you’d be the perfect people to write it,’ and we were like, ‘This is our dream. Thank you for realizing our dream.’”

Angela Kinsey (The Office), Kristen Schaal (Flight of the Conchords), Tymberlee Hill (Drunk History), and Andrea Savage (Step Brothers) star as the other Hotwife archetypes, stitched together with character traits from across the franchise. Schneider says the characters quickly become personalized by the actor, though, as witnessed by Schaal’s dead-eyed former child star, Amanda Simmons. Hulu pretty much gave them creative freedom on the set, and the seven episodes were shot in seven days—in a McMansion in Santa Clarita, Calif., naturally.

As Julie Klausner pointed out back in 2010, the characters in the Housewives franchise “all have personalities grounded in character-based comedy,” and stay true to the tradition of the character actress:

“The ‘Real Housewives’ shows represent one of the few remaining places on the increasingly tween-dominated TV landscape where I can still watch women older than the stars of ‘Gossip Girl.’ What’s more, the rhythm of the dialogue on these shows (whether or not they’re producer-manipulated) reflects an improvisational cadence of conversation that I find, at its best, reminiscent of Nichols and May or the funniest scenes from ‘Curb Your Enthusiasm.’”

The Housewives franchise has seeped into pop culture and been parodied—30 Rock devoted an entire storyline to the Queen of Jordan spoof, and SNL did its part—but Hotwives is taking the humor of the show longform. Schneider broke down how an ancient reality TV text helped them prepare.

“We used Beverly Hills season one, because I think that’s where they really found their ground,” she says. “When they started off in the OC, they were trying to figure out who they were; they weren’t always in full makeup. They were still a little raggedy at the beginning, which I loved. They wouldn’t spend a million on a party; they’d spend $100,000.”

The show has the same producers as Burning Love, a parody of The Bachelor. So how do you successfully parody reality TV, which is essentially itself a parody of TV dramas and soaps?

“I think we think of it as homage,” says Schneider. “And I think we try to not just make caricatures; they have their own stories and their own arcs.”

She adds that one element is faithful to the original series: “I think we all got to live out the fantasy of what we would do if we were fighting another woman.”

Just south of Orlando is a city called Celebration, which was established in 1994 and designed to be the ultimate utopian Disney community. It was a deep, dark failure of new urbanism, but its existence mirrors a fantasy about Florida wealth and status, which ties in nicely with the Hotwives aesthetic. (So does the terrifying epidemic of sinkholes in the area.)

Schneider is actually from Florida, and Phirman explains they thought of the characters as “bizarro Disney princesses,” which sounds like an excellent idea on paper. There’s been a Miami Housewives series, but Florida remains sorely underrepresented in the canon. Schneider explained the draw:

“It’s a bunch of new money. You’re not really from there, but you end up there. And everyone’s built up these big houses, and they’re all trying to prove something. … It’s a tropical swamp that people built McMansions on.”

Hulu’s original programming has been a bit hit or miss, so perhaps this could be their summer breakout. A parody of a reality show that parodies soap operas might have a pretty short half-life, but it certainly starts with all the right elements. We’ll watch what happens.