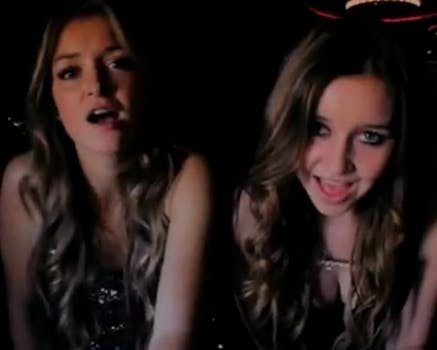 Life is hard when you’re a hot girl

“Hot Problems,” a tongue-in-cheek song about beauty sung by the teen duo “Double Take,” took the Internet by storm this week. The result was a massive hate fest, that in the end, completely missed the point.

Uploaded onto YouTube on April 17, the three-minute song, “Hot Problems,” currently sits at just over one million views with 13 times as many dislikes as likes.

With lyrics like “Hot girls, we have problems too. We’re just like you, except we’re hot,” media outlets scrambled to opine that the song was worse than Rebecca Black. The Huffington Post, for instance, told readers their ears would start burning once the girls start singing. Entertainment Weekly said the duo lacked “self-awareness.”

Many on the web really wanted to believe, desperately, that the two attractive high schoolers were really that conceited, and left death and rape threats, as well as mean-spirited, but creative, comments that generally just called the girls ugly.

Trained Internet professionals (for instance, we of the Daily Dot) however, knew the song and video was a troll—the girls were joking.

The lyrics, especially the refrain, “the whole world needs to open their eyes and realize we’re not perfect, and sometimes we lie,” as well as the video tag “Rebecca Black” were a good giveaway. The ladies aren’t serious.

In an interview with Toronto radio station Kiss 92.5 April 19, the two girls admitted as much.

“We really just wanted to do it for fun, and we enjoyed writing a funny song” Double Take told 92.5. “No, we’re not those girls” in the video, the duo told the outlet, before adding they did read a few of the comments and found the whole viral fame thing to be “all really funny to us.”