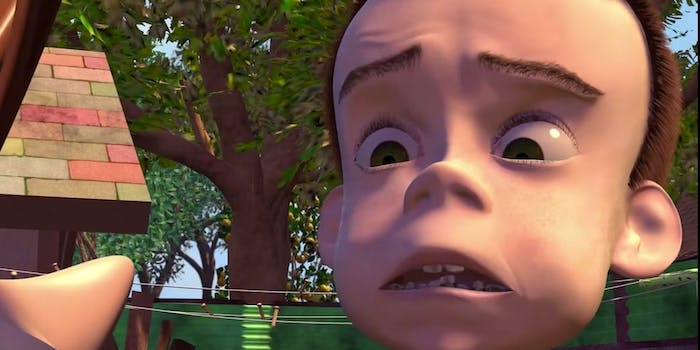 That's not a snake in your boot, Woody, it's the futility of human existence.

The parody gurus at Screen Junkies have never opted to preserve the dignity of an esteemed cultural juggernaut rather than provide us with a hilariously Honest Trailer. Fortunately for all of us, Toy Story wasn’t all that dignified to begin with.

By the time you’re done with this trailer you may find yourself thinking about the flawless grandfather of the Pixar empire in a totally different light. Is Toy Story actually all taking place in Woody’s mind? Has he suffered a dissociative break from reality rather than accept that he’s been quietly locked away in a trunk somewhere for the rest of his existence? Is the entire last third the last gasp of a man who thinks he’s making a perilous dash for freedom, when in reality he’s about to suffer an Ambrose Bierce-like Occurrence in Sid’s Backyard?

And for that matter, won’t someone think about Sid?

Luckily there’s an Honest Cameo from Randy Newman later on to ease our troubled minds—where “Randy Newman” is actually comedian Will Sasso.

And “honest” is, well… by now, you’ve probably figured that one out on your own.