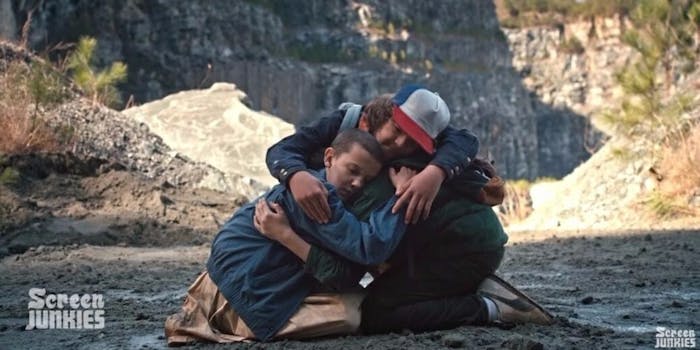 Honest Trailers is back—without its creator

Last month, two women said Signore had committed sexual harassment against them, and afterward, one of the accusing women said “around 20 women” had told her they had similar experiences with Signore. The woman also said she had told the HR department of Defy Media, which owns Screen Junkies, and nothing had been done until the allegations went public.

But in the past 10 days, it’s rolled out two new Honest Trailers videos.

First, it put out this Spider-Man: Homecoming Honest Trailer (which has already accumulated 3 million views as of this writing) on Halloween, and on Tuesday, it released this trailer to commemorate the first season of Stranger Things (that’s accumulated 2.4 million views in the 48 hours since it hit YouTube).

But before it got back into the business of making Honest Trailers, Screen Junkies posted this video explaining where the company was going in the wake of Signore’s firing.

According to Dan Murrell, a producer for Screen Junkies, the Signore news was a surprise. “This was news that was a shock to all of us,” he said. “Andy was, for everyone here, not just our boss, but someone we counted as a friend. We found out overnight that he was not the person we knew or that we thought he was. It’s taken a lot of time for us to process that, to ask the questions that need to be asked, and to feel comfortable coming forward.”

Murrell asked fans who supported Screen Junkies to also support the women who were coming forward across Hollywood.

Roth Cornet, editor-in-chief of Screen Junkies News, addressed the statement that Defy Media HR ignored the allegations. “We outlined steps forward to ensure that this would not happen again,” she said. “That is our No. 1 goal.”

These steps include using a third party to assess what happened, provide an outline of procedures going forward to make it safe for women to come forward, and clear a pathway for rebuilding trust in the community.

In a statement, Defy Media also explained it will make sexual harassment training mandatory for all employees, it will employ a code of conduct for fan interaction, and it will begin to use its platforms “for positive advocacy and support, when appropriate and relevant.”

Screen Junkies also made it clear that though Signore was a big part of the company, he was not the entire company.

“This is step one of a really long road to hopefully building something bigger and better going forward,” Murrell said.