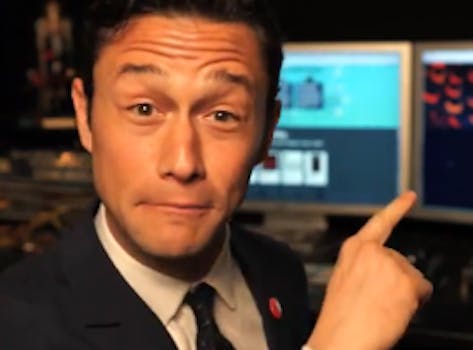 The half-hour TV show is the biggest project yet for the star's online creative collective.

After building an online community of artists, musicians, remixers, and curators, Joseph Gordon-Levitt is reaping the rewards: His collective artist project, HitRECord, is hitting prime time this fall with a new television show. “HitRECord on TV” will air on new independent network Pivot, with Gordon-Levitt as the host.

“I’m not lying, this is probably our biggest news ever,” said the star of Looper and The Dark Knight Rises in his announcement to the community on YouTube. “I dressed up, ’cause it’s really big news!”

The show will be in a half-hour variety format, featuring short films, music, animation, live performances, and other types of media frequently found on HitRECord’s website. Each episode will have a different theme, and all contributors will be paid for their work.

HitRECord is an oddity among production companies, functioning as a social network that encourages artists to collaborate, piggy-back upon one another’s works, and contribute to massive group projects, such as their bestselling series of Tiny Stories, edited by Gordon-Levitt and illustrated by elusive artist wirrow. Another thing that makes Gordon-Levitt’s production company unique is that it pays each of its collaborators, no matter how small their contribution, for the work that it chooses to include in its professional output.

Pivot bills itself as a new network for millennials, aimed at the demographic that most frequently flocks to HitRECord’s annual fall “Fall Formal” tour with Gordon-Levitt and special guests. Both HitRECord and Pivot have strong ties to Sundance; Pivot president Evan Shapiro was the president of the famed film festival, which hosted a special HitRECord panel this year, and has featured films made by the community in the past. In a recent interview with Entertainment Weekly, Gordon Levitt cited Sundance as one of his primary inspirations for forming HitRECord.

Although HitRECord is only about 80,000 members strong, their combined creative output has been enough to power three volumes of Tiny Stories (with one more due out this fall), multiple film festival appearances, and now the tv show. Still, Gordon-Levitt says he’s only begun tapping into the potential the site truly has to reach out to online artists and collaborators.

But a television show? That sounds like a big step forward.