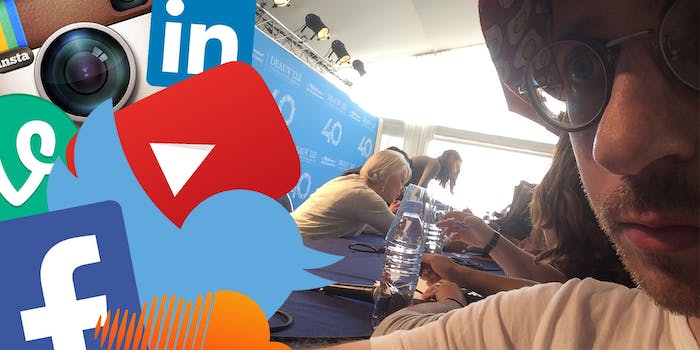 Why does Helen Mirren hate social media so much?

Actress Helen Mirren has been busy promoting The Hundred-Foot Journey, her new film about food, Michelin stars, and sauces. Recently, she told a radio station she was “insulted” to find she wasn’t part of the massive “Celebgate” leak that exposed the stolen nude photos of Jennifer Lawrence and other A-list celebrities.

“You weren’t anybody if your phone hadn’t been hacked,” she said.

For someone so invested in her digital footprint, the Oscar-winning actress, 69, has virtually shunned all social media. This week, I confronted her during a press conference at Deauville American Film Festival about not being on Instagram, Twitter, or any other services (“les médias sociaux”), despite starring in a film about cooking. One can’t be a chef without filtering images of her dishes on Instagram and Pinterest; that much is obvious.

Mirren was enticed by my hat (made by Philip Colbert), but nonetheless was against the notion of sharing and uploading random kitchen pics. I pressed on about the lack of social media presence in her family. Her husband Taylor Hackford doesn’t use Instagram either.

Shockingly, the actress sitting next to her, Charlotte Le Bon, denied any affiliation to @lebonlebon, a Twitter account with more than 90 thousand followers, after I expressed my awe of her for not actively tweeting for 45 minutes straight.