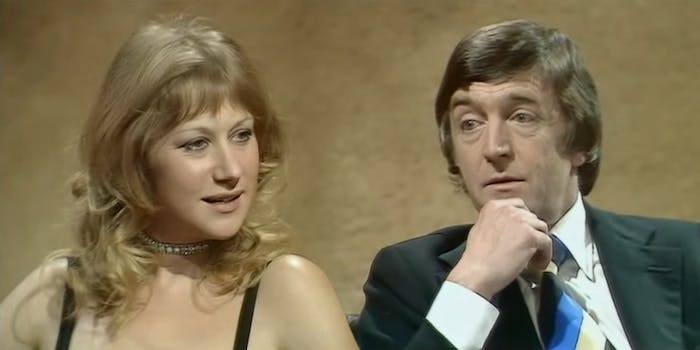 Even then, she wasn't having it.

Dame Helen Mirren has been a national treasure for years. In part because her candor amid a world of bottled Hollywood small talk is the stuff of legend.

A resurfaced interview from more than 40 years ago reveals just how early that honesty came out after receiving sexist questions from a presenter.

Mirren made a name for herself early in her decades-long acting career as a well-known actress on the stage, and by 1975 she started branching out into TV and film. That year, she appeared on Parkinson, a U.K. talk show hosted by Michael Parkinson and it was a mess from the start. Parkinson called her a “sex kitten,” quoted critics’ discussion of her physical attributes, used air quotes to call Mirren a “serious actress,” and asked her if she thought her breasts hindered her ability to become a serious actress. (Except he called it her “equipment.”)

If that happened nowadays, the online outrage would’ve started before the interview’s end, but back in 1975, Mirren—who was doing her first talk show interview at the time—was alone. At first she tried to handle it graciously, but her tolerance wore out quick. She played dumb, forcing Parkinson to state that he was referring to her figure, and then she belittled him for the comments.

“I can’t think that would necessarily be true,” she eventually answered. “I mean what a crummy performance if people are obsessed with the size of your bosom over anything else. I would hope that the performance and the play and the living relationship between all the people on the stage and all the people in the audience would overcome such boring questions, really.”

Mirren got a couple of other digs at Parkinson throughout the interview, such as stating her dislike of men in cleanly cut suits (which he was wearing in the interview). When he asked about her opinion on nudity in film, she spoke of the male directors who did it for commercial reasons or were a “male chauvinist”—something she inferred about Parkinson.

Watching the interview now it’s satisfying, but at the time it might’ve been downright radical for Mirren, an up-and-coming actress, to call out a famous talk show host for his sexism. Even she was impressed with how she was able to handle the interview years later, and as she told the Telegraph in 2011, “he was such a fucking sexist old fart.”

But she ended up sitting down with Parkinson again years later, this time so she could promote The Queen, the film that would win her an Oscar. They were both older and could look back at their first interview with more clarity. But Parkinson brought up her breasts again and attempted to diminish his comments from 1975, something Mirren again wouldn’t let him get away with.

“I hated you,” Mirren told him. “I thought you were a sexist person for mentioning my breasts.”

She may have mellowed since then, as she told Parkinson later in the interview, but she’ll still call it out for what she believes it is.