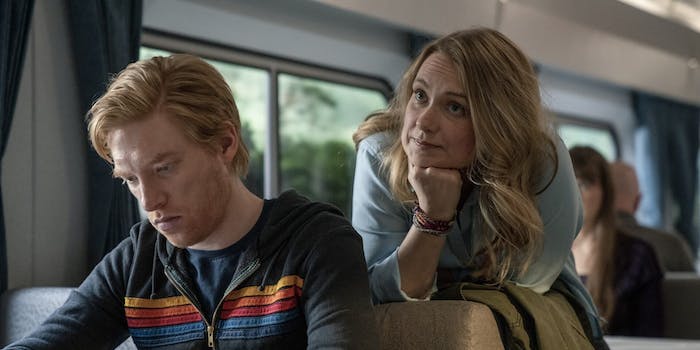 Merritt Wever and Domhnall Gleeson star in this brilliant show from the director of 'Fleabag'.

Wever stars as Ruby, a dissatisfied 30-something who once made a dangerously tempting pact with her college boyfriend Billy (Domhnall Gleeson). If either of them ever texts the word “RUN”—and the other sends back the same reply—then they’ll drop everything and meet at Grand Central Station, fleeing across America by train.

Run’s first half-hour episode is a case study in how to start a show with panache. Laden down by the trappings of suburban family life, Ruby is on her way to yoga class when that “RUN” text arrives. We overhear one side of a phone call with her husband, where Ruby adopts a girlish, whining tone and he treats her like a personal assistant. Wever’s face cycles through boredom and frustration, instantly clarifying why she’d abandon her life for a guy she hasn’t seen in over 15 years. Before we even see Billy on-screen, that text message is like a bolt of lightning.

Directed by Kate Dennis, Run gives the impression of being constantly breathless, either due to its hectic pace or the two leads’ lustful panting. Billy and Ruby come together in an explosion of jet-propelled horniness and self-destructive tendencies, motivated by a very relatable desire to escape adult responsibility. Their getaway scheme is partly fueled by nostalgia, reviving a relationship that flourished in their early twenties. With Billy, Ruby is a very different person from the saccharine housewife we heard on the phone. They encourage each other to act like selfish assholes, reveling in nasty jokes, childish pranks, and mutual denial about the consequences of their actions. While Ruby ditched her family, Billy just fled a lucrative career as a celebrity life-coach – a move that seemingly gives him the upper hand, which explains why Ruby starts off as the more guarded of the two.

Much of the story takes place on trains, amping up the tension as Billy and Ruby flirt, fight, and keep secrets from each other in cramped quarters. By sheer coincidence, it’s a deeply satisfying concept for our present moment. The story begins with two characters fleeing their homes (something we’re currently forbidden from doing), jumping onto a crowded train (ditto), and constantly getting up in each other’s personal space. It’s hard to tell if they’re total exhibitionists or if their histrionic folie à deux just happens to play out in a public place, but you can easily imagine the other Amtrak passengers live-tweeting their antics as they chase each other through the carriages.

Witty, duplicitous and desperate, Ruby and Billy are clearly made for each other in a way that Ruby and her boring husband clearly aren’t. But if these two people are soulmates, they’re the Bonnie and Clyde kind. They’re completely obsessed with each other but they patently make each other worse, escalating their affair into a Hitchcockian thriller as the season progresses. In the five episodes I saw for this review, I also got to meet a couple of predictably delightful supporting characters played by Phoebe Waller-Bridge and Archie Panjabi (The Good Wife), but this really is a two-person drama overall, fueled by Wever and Gleeson’s explosive chemistry and intense, nuanced performances.

Run begins on HBO on April 12.