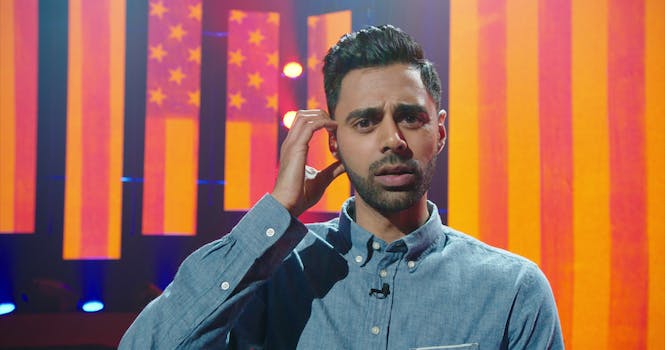 If you’re unfamiliar with Minhaj, chances are you’ve seen him lately. Minhaj joined The Daily Show as a special correspondent in 2014. He was handpicked to perform at the White House Correspondents’ Dinner, where he killed. In 2015 he debuted a one-man show called Homecoming King off Broadway, which was an enormous success.

Now he’s turned that one-man show into his first Netflix comedy special. It’s just as uproariously funny and moving as you’d expect from one of comedy’s rising talents.

At 31, Minhaj has a boyish charm mixed with a California bravado that can play as cocky. He comes charging out of the gate with pop-culture slang like “YOLO,” “#blessed,” and Drake references. But don’t let his modernity fool you.

Underneath the swagger and the slang lies an incredibly intelligent performer. Minhaj is seamlessly able to take one-liners and use them more as patient, gradual stories that unfold with unbelievable precision rather than cheap punchlines. The results are jokes that feel personal and earned, rather than obligatory.

Like many standup comedians, however, Minhaj’s story is filled with ups and downs. He starts off the special giving a rundown of his life as a single child, focusing primarily on his relationship with his father. This isn’t just an autobiographical look at Minhaj, although the entire piece is dedicated to his adolescent upbringing. Minhaj uses his dynamic with his father, and his time growing up in Davis, California, to tell a larger, overarching message about race and creed in particularly heated times.

While Minhaj certainly acknowledges the racially charged climate around him—expressing his anger toward the deaths of Travyon Martin and Freddie Gray—he doesn’t overly reference President Donald Trump or current events like the Muslim travel ban. Instead Minhaj focuses more on the everyday occurrences of racism that brown people experience constantly.

With animated backdrops expounding upon Minhaj’s words, he goes into detail describing the time a childhood crush—a girl named Bethany—asked him out for prom. Minhaj does a terrific job setting up this story, acting like a conductor effortlessly commanding his 98-piece orchestra. After his father tells him he cannot attend, Minhaj decides to go anyway. He describes with vivid detail the sense of excitement and anxiousness he feels as he prepares to sneak away to Bethany’s house.

Approaching the door, his story crescendos when he is greeted by the crestfallen face of Bethany’s mother, Mrs. Reed. A pimply Minhaj sees past Mrs. Reed, while a Caucasian jock awkwardly places a corsage on Bethany’s dress. Mrs. Reed explains to a bewildered Minhaj that having him take Bethany to the prom “wouldn’t look good for the photos,” saying they still think he’s charming and kind.

As Minhaj finishes telling this story, evoking every devastated emotion he surely felt at the time of the incident, the audience gasps and reacts accordingly. What sets Minhaj above other standup comedians, however, is his ability to have his audience hooked on every word and syllable. Minhaj isn’t just a comedian—he’s a storyteller.

Minhaj focuses on little moments such as this. In lesser hands, there might be more jarring examples of bigotry. But Minhaj realizes that racism isn’t just found in loud, abrasive remarks or acts of violence. It can also be found in small, quiet moments when a white person is simply smiling through her teeth at you.

This is where Minhaj succeeds. He is able to be real and hard-hitting, while still remembering to make you laugh. He is also impeccably self-depreciating, especially when he talks about his experiences confronting Bethany many years later. While other comedians may use such an opportunity solely to poke fun at themselves, Minhaj uses the incident to educate his audience.

The special’s director, Christopher Storer, also helps give the proceedings a cinematic touch.

Storer utilizes extreme close-ups when Minhaj is wanting to hit a point home, or a Michael Bay-esque wrapping-around shot when Minhaj is telling a particularly involved narrative. It gives the comedy special a more personal approach than your average standup, taking great advantage of the format. It is obvious Minhaj and Storer took great care in adapting this from the stage to the Netflix screen.

As Minhaj’s special comes to a close, there is a great sense that you know way more about him not only as a comedian, but as a person. When he talks about auditioning for The Daily Show, for example, he uses his nervousness in meeting Jon Stewart as hilarious moments of levity that act to underline the kind of affable person Minhaj is.

Thanks to Minhaj’s storytelling prowess and his effortless ability to interweave humor and heartbreaking real life, Homecoming King is miles above your average comedy special. Minhaj has truly come home, and he’s here to stay.