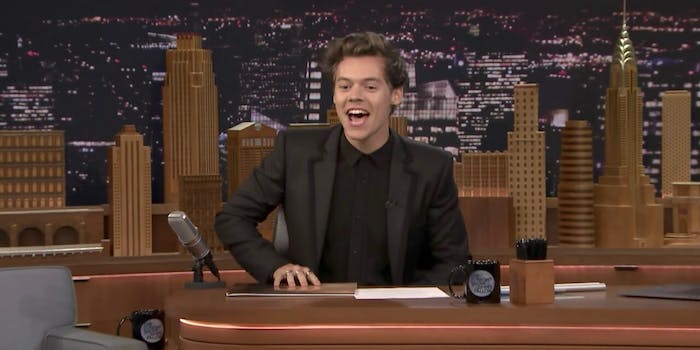 Harry Styles ‘kills’ Jimmy Fallon to get the ‘Tonight Show’

Rising up to take over a top late-night mantle takes decades of honing your talents, perseverance, and for many of its hosts, maybe a little privilege. But for the “next” host of The Tonight Show, there’s another magical element to it.

After talking to Harry Styles about his performance with Stevie Nicks, Jimmy Fallon showed Styles the jade bottle Nicks gave him as a gift. Nicks told Fallon that he could make a wish by blowing into the bottle and closing it, joking that’s how he got The Tonight Show. And then Fallon hands Styles the bottle.

You can see where this is going.

We’re just saying, if Styles ever wanted to take a break from being a musician and touring the world, he already looks quite at home at that iconic desk.