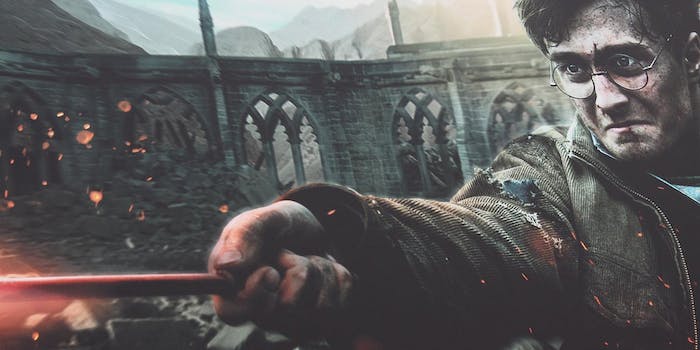 As you can imagine, things get pretty wild.

The Internet has placed the entirety of human knowledge at our fingertips; in this age of instant gratification, you can buy anything you want, video-call people thousands of miles away, and use social media to keep track of friends you haven’t seen in decades. But the Internet also shines when it takes something stupid and makes it an in-joke for us all to share.

And right now, the Internet is obsessed with Harry Potter’s penis.

It’s always hard to properly credit whoever kicks off a meme like this, but some genius on Tumblr decided to take excerpts from J.K. Rowling’s beloved Harry Potter books and replace instances of the word “wand” with “penis” or some variation thereof. Quickly, others on Tumblr followed, and then it spread to social media—and, appropriately enough for the world of Hogwarts, the results are magical.

An excerpt: “‘Are you OK?’ said Harry urgently. ‘My penis,’ said Ron. ‘Look at my penis.’ It had snapped, almost in two; the tip was dangling limply, held on only by a few splinters.”

Of course, it’s hilarious because these books are predominantly written for children, and so many now-adults grew up reading them. But it’s also amazing how easily the word “penis” fits in with the concept.

Another example reads: “But a reckless rage had come over Harry. He kicked his trunk open, pulled out his penis and pointed it at Uncle Vernon.”

As you can imagine, things get pretty wild. Do some Googling for yourself and you’ll have plenty of R-rated fun, but here’s one last excerpt that reimagines the boy wizard as something that sounds far more like a late-night Cinemax movie:

“Harry took the penis. He felt a sudden warmth in his fingers. He raised the penis above his head, brought it swishing down through the dusty air and a stream of red and gold sparks shot from the end like a firework, throwing dancing spots of light on the walls.”

Photo via Dave Catchpole/Flickr (CC BY 2.0)