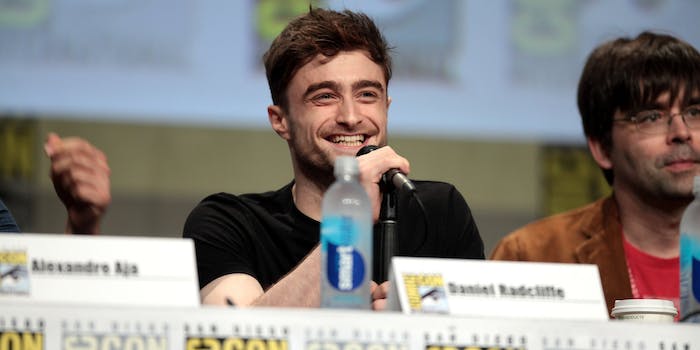 Why did Harry Potter visit a galaxy far, far away?

Hold on to your wands and lightsabers. A connection between the Wizarding World and a galaxy far, far away came to light Tuesday thanks to a recent visitor to the Star Wars: Episode VII set.

According to ITV, actor Daniel Radcliffe admitted to visiting the set of the new Star Wars film at Pinewood studios recently. He shared his thoughts on the visit while on the red carpet at the premiere of his new movie Horns.

“I was so excited, ’cause I literally just watched the original Star Wars movies very recently, so I was like a new fan going on set. But I got to meet Harrison Ford and have a chat, and he was lovely. It was great,” Radcliffe said.

It’s fun to hear that the Harry Potter star is a recent fan of the franchise and was excited about his visit. However, the best part was learning that Star Wars actually wasn’t the reason behind his visit at all.

“Most people would be excited about seeing the Star Wars set but I went out because all my friends were working there ’cause it’s the Potter crew, they’ve basically just moved onto that, so I was going to see all of them,” he said.

While some fans may be disappointed that Radcliffe’s visit has nothing to do with a planned cameo in the upcoming film, they can at least take comfort in knowing that there is a connection between the two major franchises. It looks like Episode VII is in the very capable hands of the Potter crew at Pinewood. May the magic be with them. Always.