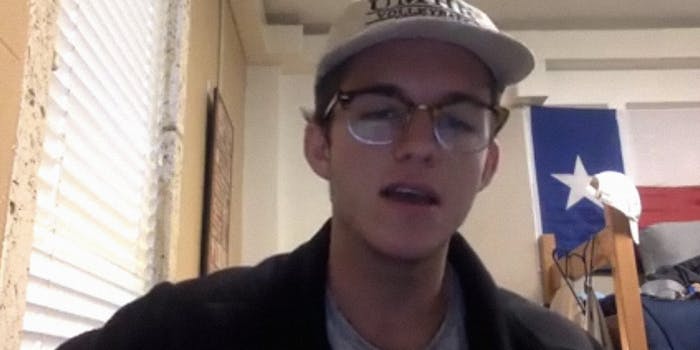 Harrison Brown was killed Monday in a brutal campus act of senseless violence.

On Monday, freshman Harrison Brown was brutally murdered in the heart of the University of Texas at Austin. His alleged attacker, Kendrex J. White, was a fellow student who stabbed him on his way to assailing three other people on campus. The incident has been reportedly linked to mental health concerns, and no other motive has been established.

The senseless violence rocked an academic community in its final week of the spring semester. Monday evening as his identity was confirmed, Brown’s Facebook profile made the social media rounds. Here, the UT community found a heartbreaking public video that finds the student from Graham, Texas, performing an acoustic cover of Edwin McCain’s 1998 soft rock ballad, “I’ll Be.”

He’s apparently in his dorm room, singing into a laptop. He’s wearing a volleyball cap, with a big Lone Star flag adorning the top bunk. The track, you may remember, features the painful lyric “I’ll be better when I’m older.”

First cover I've posted on social media in a long long time. Its not the full song but I hope you enjoy it! I'll Be – Edwin McCainThe quality of the video kinda messes with the sound, and playback… Sorry!

The cover serves as a brave experiment made by a freshman, working on finding his voice—one who moved to Austin to do just that. The song itself is about friendship and trying harder when the chips are down. A cursory read of quotes from Brown’s friends about him reveals he was just that type of person.

Disclosure: The Daily Dot’s staff is filled with Texas alums, including its managing editor. We routinely hire interns from the Moody College of Communication, and were rocked by the brutal events that unfolded two miles away from the Dot office, just outside of Gregory Gym. We’re proud members of the Texas community, one that’s rallied around the Browns, with supporters raising more than $65,000 for the family as of this writing.

The next time you’re in a grocery store aisle or dentist’s waiting room, and McCain’s “I’ll Be” plays, think of Brown. Tell university officials to play “I’ll Be” at graduation and before kickoff. After all, his bedroom performance makes us more proud than ever to be Longhorns.