Comedian, writer, and Parks and Recreation executive producer Harris Wittels had a lot of fans. His sudden passing earlier this week has prompted an outpouring of love from fellow comedians and others who worked with Wittels during his career, but Aziz Ansari‘s tribute is perhaps the most touching.

“There are so few people that you meet in life that give you that feeling that you’ve found a real unique, original person,” Ansari wrote. “Harris Wittels was one of those and we lost him yesterday. He was 30 years old. I’ve been devastated.”

Ansari, who worked with Wittels on Parks and Recreation, goes on to recall a seemingly endless number of hilarious and heartfelt moments the two shared, and even reveals parts of movie scripts Wittels had written that had never been filmed.

One of the funniest parts of Ansari’s trip down memory lane involves an NBC workplace harassment email that was sent to executives as well as Ansari and Wittels. Wittels’ response, which Ansari says was sent as a “reply all,” is an HR nightmare of epic proportions, but shows just how far Wittels was willing to go to make people laugh. 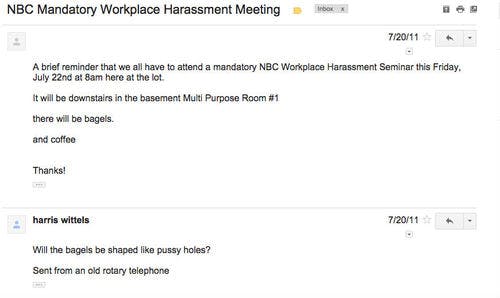 Ansari’s letter is a touching goodbye to someone who was loved very dearly by lots of people, and it’s definitely worth a read.

Photo via WarmSleepy/Flickr (CC BY SA 2.0)