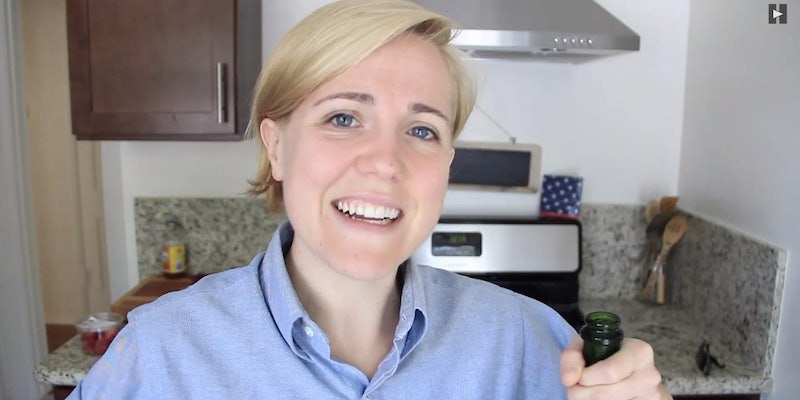 “In the prior years the buzzwood has been ‘integrity’ and ‘authenticity,’” the 27-year-old YouTube star explained over coffee on the east side of Los Angeles. “I think transparency is the next big thing. Transparency with budgets, transparency with projects.” She pauses. “Do you think when people realize we’re not all millionaires even a little bit, will they still be interested in us?”

The Internet is definitely interested in Hart, millionaire or not. (She’s not.) In 2011 Hart wanted to connect with her best friend living across the country, so on a lark, she uploaded a video of her doing what she’d always done for her best friend—drunk cooking. Ever since she’s increasingly opened her world up through the lens of YouTube, gaining fans and letting them follow her on her cooking and charitable adventures. She’s amassed 1.3 million self-proclaimed “Hartosexuals” on the site, and this week she expands her reach into the publishing world with her first book, My Drunk Kitchen: A Guide to Eating, Drinking, and Going With Your Gut. While many other YouTube personalities move on to television and other video-related gigs, Hart admits that she’d always imagined a book as the big payoff for her hard work on YouTube.

“I have always wanted to write a book,” Hart said. “I grew up a voracious reader. I read a lot of nonfiction and watch TED talks. I don’t read a lot of fiction anymore, but fiction was escapism for me.”

As for whether the book always wanted her back? “Back when I tried to sell the book originally, no one really wanted a book from a YouTuber,” she explains. “I was a little ahead of my time.”

It may purport to be a cookbook, but the My Drunk Kitchen book reads more like therapy. Hart jokes that it’s really “self-help parody.” The prose feels like Hart could be reading it to you as she prepares each meal in her kitchen, camera locked on her every move. The cooking isn’t so much about the food, but rather a delivery system for Hart to impart her wisdom, make jokes, and get closer to her readers. There’s even a passage where Hart pauses, mid-book, to notice a dirty keyboard and clean it off. Cookbooks don’t often pause to bring you out of the fantasy of food into the reality of writing, but Hart’s style is far from conventional.

“That’s one of my favorite parts,” she smiles. “It’s like, ‘oh, you’re writing this book wherever you are.’”

That leap from impersonal to deeply personal and connected is inherent in everything Hart does. In person, Hart is no different from her book or video incarnations, just with the added ability to actually touch you. She likes to fistbump, and when you say something she agrees with, she snaps for you. Hart listens, really listens, and that constant feedback loop mentality she built on the digital Web was actually detrimental to the book-writing process. She’d want to share small bits with her editors and get feedback, but she says they kept pushing back and demanding she “just write the whole thing!” Despite two years of producing weekly videos, she described the demands of the book writing process as “very painful.”

“In 2013 I was blessed with the opportunity to shoot a movie, go on tour, and write my book all at once,” she explained. But juggling all those projects took its toll. “It was the weirdest balancing act. Every day it was deciding which thing would get the 50 percent energy.”

She’s managed to juggle all the aspects of her busy life with aplomb, from the successful release of Camp Takota with fellow YouTubers Grace Helbig and Mamrie Hart (no relation), to her successful MyHarto tour that she crowdfunded via Indiegogo. Despite her digital upbringing, she sees her book as more of a physical entity.

“As much as I do all my reading online, when I go to beach and I take a pen and put my notes in it, I feel like I really absorbed it,” said Hart. “It’s good to flip open a book and [have it] fall to that passage you read a thousand times in college. I shared a book of poetry with a friend of mine and asked her to share her notes with me. I hope My Drunk Kitchen can be like that for my fans. They can pass it around, get it messy.” 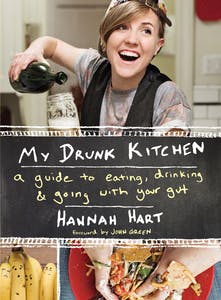 Messy is definitely Hart’s forte. My Drunk Kitchen is no stranger to spills, although as videos they’re anything but sloppy. You could use Hart’s videography as a training series for success on YouTube, from her cadence and her jump-cuts to her ability to interlace jokes into caption and callbacks, the fact that there’s a beginning, middle, and end to her videos. It’s a sensibility Hart says she had to learn as she moved into her fame.

“I was so ignorant of the space in 2011,” she laughed. “It wasn’t until I went to my first VidCon, and that’s where I met John [Green] and Jenna [Marbles] and all of those people. Everybody was referencing stuff. I have been a genre person my whole life, and to be in an environment where I had no idea what anyone was talking about was difficult.”

Marbles urged Hart to be forthcoming with her subscription strategy (“Jenna was the first person who told me, ‘You need to say “subscribe to my channel,” you need to start saying that right now’”) while Indianapolis-based Green tried to impress upon her the idea that her future in YouTube was not dependent on a move to California. Hart did make the move, however, leaving New York for the West Coast. She’s somewhat wary of the heavy focus on Hollywood for YouTube creators now, although she sees the allure of big cities as central points in the YouTube community.

“It’s kind of like with London,” she explained. “I could go to London and spend two weeks doing collabs, the same way someone could come to L.A. and set up their collabs. I just hope people are still up-and-coming on YouTube.”

Growth in her medium is of paramount importance to Hart. Since returning from the yearly VidCon pilgrimage, she said she’s been deep in thought on new ways to embrace her community and finding ways to do that outside the established YouTube model of brand partnerships and deals. Despite it being the current world order, Hart isn’t interested in brand deals for the sake of it.

“What if it was just as simple as creating content and interacting with the dedicated community?” she ponders. “YouTube is a great goal. Being a self- sustained entertainment model. Many hands make light work. Maybe—spoiler alert, fingers crossed—as I go on to make more expensive projects and pay more people for more things, I would think it would be great to make your community your investors, instead of corporations.”

We joke about her penchant for potato chips in recipes for the books. I ask after her favorites, and she names Kettle Chips but definitely not Lays. When I laugh that she’ll never get a brand deal with Lays now, she gets serious.

“I dont want a Lays sponsorship; I think those chips are bad for people to eat,” said Hart.

“I pray for the future of celebrities people are accountable for the words they speak. I want my audience to be my only sponsor. One day.”

There’s that transparency again. It’s served Hart extremely well, building her a loyal and passionate fanbase. Hart is one of the handful of women who command major audiences in the YouTube space, and one of an even smaller handful that does so without being primarily a beauty or fashion vlogger. Even more, Hart’s followers—mostly women at every point of the sexuality spectrum—express the same kind of crush-status on Hart, who’s openly gay, as they do on the throngs of straight boys in the space.

“You can say it; I’m a total stud,” Hart laughs. “I think I’d have to be a total narcissist to say it felt normal. It feels like living a daydream. I kind of thought I’d embrace it a lot more. I’ve really just stayed me but also grown up. I think this is exactly who Hannah Hart is as she becomes an adult and gets more emotionally balanced and mature.”

Many of those smitten fans are younger than Hart, although the age of her views runs the gamut. Still, speaking to a younger demographic imbues Hart with a level of responsibility that she embraces, both through her general demeanor and through charitable efforts like the MyHarto series that took her on a tour of soup kitchens across America funded by her voracious fans.

“I feel a deep social responsibility to use this outlet to promote positive change. I embrace that,” Hart said. “Being older, I love being a positive and authentic role model. I believe that these 13 to 17 or 18 to 24 groups are the people who are going to be responsible for the world when I’m too old. It’s really important that we [the YouTube community] pay attention to our teenage fans.

“I’m happy Tumblr exists because the generations after us will never know what it feels like not to have a place for your voice. The way it’s structured and the way YouTube comments are structured, people put their opinions out there and then are forced to defend their opinions. Doubt is good. Having a dense, rich experience with their beliefs is good.”

For Hart, being a part of that community and serving them is at the core of her methodology, and the reason behind why she wrote her book the way she did.

She’s back to that transparency again. And it’s that kind of ethos that keeps fans coming back to Hart time and time again.