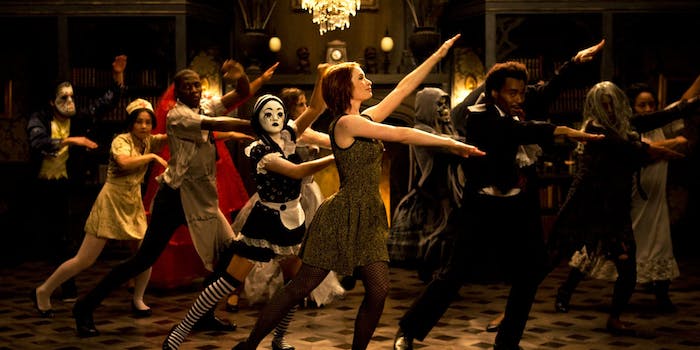 Nerdist, Geek & Sundry, and dozens of other creators take advantage of top-notch sets for their shoots.

Thanks to Guillermo del Toro and Legendary, Halloween just got extra spooky for dozens of YouTube creators, as YouTube Spaces across the globe hosted custom-designed sets all October.

Del Toro partnered with Legendary Entertainment and YouTube to design and construct the creepy sets for communal use. Numerous vloggers and production companies have taken advantage of the myriad of options for their October programming, with the intricate details of the sets and the ease of using them a welcome boon for creators. The Nerdist used the sets at the YouTube Space L.A. for various purposes, including a bimonthly Nerdist Presents sketch that became bigger and better thanks to the sets.

“For us, when we’re shooting sketches for Nerdist, we’re almost always using locations,” said Nerdist director Andrew Bowser. “We’re in a house, or in an apartment, or in the offices. Honestly, to shoot on something that looks like this… If I were to look for a mansion location—in fact we had just looked for a great room type of set for a sketch we did a couple weeks ago, and those locations priced us out—our budget for the entire sketch would have been the location fee. I don’t even know how we could have shot this otherwise.”

Geek & Sundry, now sister companies with Nerdist under the Legendary umbrella, also took advantage of the space in L.A.. Founder Felicia Day hadn’t tackled an ambitious musical number since The Guild, but she felt the elaborate sets were a perfect backdrop for dance. She even tapped her own personal dance teacher, Tor Campbell, to choreograph and perform in the number.

“She said she’s always wanted to have us collaborate and work together, and out of nowhere she poofed and called me for this,” exclaimed Campbell, who’d never spent time on a set, let alone at the YouTube Space L.A. “I didn’t even know something this like existed!”

The number, of course, has video game flare in addition to a spook factor. The dance moves and track are an amalgamation of actions and tunes from classic horror video games. The choreographry team also provided a tutorial so they could include more than just the trained dancers in the final product, inviting in partners and collaborators to try their hand at the moves for the music video.

“It’s called ‘8-Bit Hunt,’” he explained. “We decided to take five dance steps from each popular video game, like Castlemania, and combined them all together to make one dance step like ‘Thriller’ or ‘The Electric Slide’ or ‘The Cupid Shuffle.’”

While he’s not a gamer, Campbell said he had an invaluable tool for learning about the video games Day wanted to include.

“I had to watch the YouTube [videos],” he said. “It’s so funny, because people actually record themselves playing the video games. I [watched that] to try and get some moves, otherwise I would have had to play the game, and lord knows I wouldn’t have made it through—I’m that bad.”

For both Nerdist and Geek & Sundry, the Halloween sets provided by the YouTube Space L.A. opened creative doors that significantly changed just how polished and easy their productions could be in October.

“We’ve been pushing more towards cinematic-looking, narrative-driven sketches that aren’t those simple list sketches or things you can shoot in the office in an hour,” said Bowser. “I’ve wanted to push in that direction more—we all do—so having these sets, this will be one of the best-looking, if not the best-looking, sketches we’ve done. It’s more of a horror short film. Because of the production value that these sets add, it’s kind of crossing over from a sketch to a horror short. We have a growing horror fanbase, and they’re going to love the mood and the look of it all.”

The sets will have their last spooky gasp on Friday when YouTube invites creators and guests to a Halloween party that opens the stages up to a haunted house.