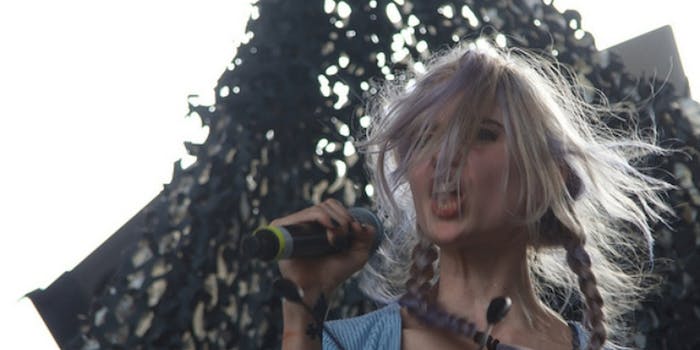 "I hope you know you are doing the world a disservice."

Grimes’s 2012 album, Visions, is a decidedly dark but beautiful work, and the Canadian musician (real name Claire Boucher) has been very open about the process of writing it.

“I blacked out the windows and did tons of amphetamines and stayed up for three weeks and didn’t eat anything.”

That quote comes thanks to her Wikipedia page, which cites a 2012 CMJ interview. First added in 2013, the quote has apparently been deleted and added back several times in the past year. It currently doesn’t show up, though the link to the CMJ article is still there, slightly reworded. Under that passage is now a link to her Tumblr post from Aug. 17.

To Boucher, that edit made her sound like a proponent of drug use. On Tumblr post, she called out the people editing her page:

“losing people to drugs and alcohol is the worst because they destroy any good memories you have of them before forcing you to deal with the empty space they leave behind. also whoever keeps putting the few quotes i said early in my career about drugs back into my wikipedia page is an asshole.  I don’t want that to be part of my narrative, and if it has to be I want people to know that i hate hard drugs.  All they’ve ever done is kill my friends and cause me to be unproductive.  Editing a website that people take seriously and reference all the time so that it looks like i think amphetamines are cool is incredibly irresponsible, people might read that and think its a cool thing to emulate.  I hope you know you are doing the world a disservice.  I just watched another person I care deeply about basically turn into gollum and my heart is broken. “

History has proven Wikipedia to be a false narrator, and Boucher has every right to edit her narrative.