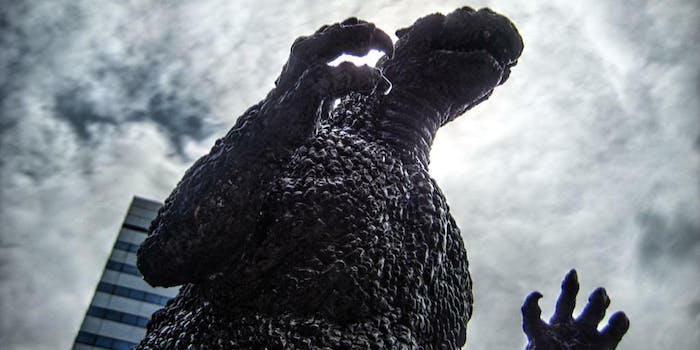 ‘Godzilla’ proves that when it comes to Hollywood, size matters

As Godzilla gets bigger, so do the movies.

With its worldwide box office approaching $400 million, it’s fair to say the new Godzilla is huge. But the money isn’t the only thing that’s big about the giant lizard.

Lisa Wade, a professor at Occidental College with a Ph.D. in sociology, recently wrote a piece for the website Sociological Images commenting on a graph that’s been circulating online regarding the size of the new Godzilla. Wade explores several theories of why this might be the case, ranging from the enlargement of actual skyscrapers to compensation in order to keep up with our increasing inundation of commercial media.

Even without this newest growth spurt, Godzilla has always been big. In addition to the formidable size of its titular character, the original film was also big on ambition. A metaphor for a post-nuclear world, the original Godzilla became part of a long line of monster films designed to do more than just scare. Ian Buckwalter of NPR has praised director Gareth Edwards for understanding the film’s heavy themes, writing that he “demonstrates a clear understanding of what made 1954’s Godzilla such an enduring story.”

The difference, however, between the Godzilla of 60 years ago and the Godzilla of today is that the original seeks to explore the relationship between man and the world around him, while the remake frames man as a peripheral factor. Now, Godzilla’s immenseness doesn’t just overwhelm the screen, it overwhelms the narrative, too. Humans are puny compared to him—in every possible sense. The Dissolve’s David Erlich finds Edwards’ decision to let Godzilla grow not only in size, but in importance. “The film’s evocative closing shot serves as a resonant reminder that just because we’re the planet’s predominant storytellers doesn’t mean that the story is necessarily about us,” Erlich admonishes.

Godzilla’s messy combination of giant showboating, political undertones, and attempted character nuances are especially resonant of one filmmaker: Christopher Nolan. As a reflection of George W. Bush’s America, Nolan’s Batman Begins was the first in a series of blockbusters from its era to use a trope that’s been recycled again and again in the last decade: the rise of massive urban destruction.

In an op-ed for the Hollywood Reporter, screenwriter Zack Stenz (who has himself written several big superhero movies), commented on the irony of this trend. Stenz observes, “Certainly the earnest predictions that post 9/11, audiences would reject lighthearted scenes of urban destruction that felt too much like real life are looking more absurd with each film that features falling skyscrapers, crushed urban infrastructure, and dazed, ash-covered survivors and strikes it rich at the box office.”

Michael Phillips, of the Chicago Tribune, has a slightly different take on all this amplified destruction. On an episode of the popular movie podcast Filmspotting, Phillips wondered, while reviewing 2013’s Man of Steel, whether the on-screen destruction of all these cities hasn’t happened in spite of 9/11, but because of it.

The level of destruction… is kind of grotesque. In other words, people get thrown through not just one building but 17 buildings, so that Metropolis, by the end, and again this is conscious, by design, looks a lot like New York 9/11… those visual echoes of real pain and destruction are deliberate and they’re extremely heavy-handed, and I think they just sit on the damn movie… and really throughout a lot of Zack Snyder’s Superman film, I just felt… too much… The Michael Bay Transformers films are full of images like that.

Godzilla has always been a story about destroying a city, but the need to make him bigger, and in turn, to make that destruction bigger, says more about the current climate of Hollywood blockbusters than it does about staying true to an original version. Phillips might be able to argue the merits of Nolan’s Dark Knight trilogy, but his statements about a larger problem with cinematic destruction are extremely troubling—the implication being that what started out as a way to acknowledge where the country was after 9/11 turned into a way to exploit that.

What’s worse is that over time, people forgot that exploitation was even happening. When you add up the destruction of the Dark Knight trilogy, the initial Transformers films, Marvel’s The Avengers, Man of Steel, and numerous other tentpole movies, it’s hard to even distinguish what’s being destroyed anymore. It appears it no longer matters how the destruction occurs, just that it’s bigger and badder than the previous time.

And the technique isn’t solely applied to blowing up cities. Just look at the first photo from Zack Snyder’s upcoming Batman vs. Superman movie; the caped crusader is almost alarmingly muscular. He’s no longer a superhero; he’s a bicep in a suit. Then there’s the advent of 3D and IMAX screens; inflated budgets, ticket prices, and runtimes; and additional food items at the concession stand. More and more, going to a Hollywood movie is starting to feel more like a trip to the Cheesecake Factory. You have lots of options, all of them very large, and all of them very bland.

In this sense, Godzilla is the perfect movie star for today’s audience. He (or she) is not uninteresting, yet because he’s not a person, he also doesn’t have to be anything more than a metaphor. But where that metaphor once revolved around nuclear warfare, now the metaphor is for cinema itself. As digital effects eclipse real people and spectacle eclipses story, Godzilla’s hugeness represents an effort on Hollywood’s part to substitute bigger for better. It isn’t as if the two are exclusive, but there’s a fine line between the likes of The Empire Strikes Back and The Phantom Menace.

Like King Kong before him, Godzilla is an indelible cinematic figure. He keeps coming back again and again, and with each resurrection, his appearance says a little something about the time period he was brought into. When Peter Jackson released his version of King Kong in 2005, it turned out to be indicative of the future of his career—and of blockbuster movies on the whole. His Kong was an inflated bit of chaos, which sacrificed human feeling for digital excess. The motto was more, more, more.

Flash-forward to 2014 and the release of Gareth Edwards’ Godzilla: That model has not only advanced; it’s become the standard. Godzilla’s new size might seem alarming, but even monsters have to go on steroids to compete in today’s multiplexes.

Photo via galactic.supermarket/Flickr (CC BY 2.0)