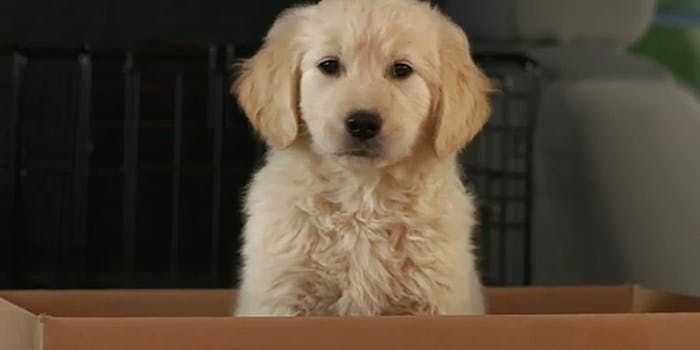 The company is in trouble for portraying a puppy mill.

GoDaddy has pulled its Super Bowl ad after intense backlash over its depiction of animal cruelty.

The ad, which premiered on Today on Tuesday morning, at first appeared to be a parody of Budweiser’s Super Bowl ads featuring an adorable puppy. Like Budweiser’s ad this year, the GoDaddy spot zeroes in on a golden retriever puppy who must find his own way home after getting separated from his owner.

But instead of being happy that his puppy made it home in one piece, the owner in the GoDaddy ad is excited for another reason. Here is the controversial ad, featuring a cameo from longtime GoDaddy spokeswoman Danica Patrick.

GoDaddy has been criticized for previous Super Bowl ads, mainly over how it depicts women, but the shock and backlash over this year’s ad began as soon as Today’s anchors finished watching it. That backlash went even further online as people criticized GoDaddy’s rosy depiction of puppy mills

Guys, it’s GoDaddy. They knew exactly what they were doing. They’re outrage-baiters by trade.

I am saddened by the #GoDaddyPuppy ad, #GoDaddy needs to learn the truth behind the monsters selling puppies online. pic.twitter.com/nK1ts7wsm8

There is nothing funny about selling puppies online. @GoDaddy @DanicaPatrick please choose NOT to air the #GoDaddyPuppy commercial! #NoDaddy

Animal-welfare advocates launched a Change.org petition calling for GoDaddy to pull the ad; the petition gathered more than 42,000 signatures by the time it closed. Helena Yurcho, who started the petition, wrote that regardless of whether GoDaddy’s ad was satirical, it was “offensive” and  could end up being harmful to dogs.

The ad essentially encourages the existence of for-profit puppy mills while shelter animals wait patiently for their forever homes, or worse—euthanization. By glamorizing online animal purchases, GoDaddy also glosses over the dangers of this process: animals can and often are sold to people who run fighting rings, abuse animals, or otherwise do not adequately care for them.

Animal rights are no laughing matter and for GoDaddy to portray them as such is cruel and irresponsible.

GoDaddy heeded the backlash after just a few hours and pulled its ad.

Loud and clear, we heard you. @Blakei on changing course with this year’s Super Bowl Ad: https://t.co/gzduFypdEi

In a blog post, GoDaddy CEO Blake Irving explained that the ad supposed to raise awareness of how people used GoDaddy to build their presence and their brands online. Irving and GoDaddy clearly didn’t expect the response that the ad received.

“At the end of the day,” Irving wrote, “our purpose at GoDaddy is to help small businesses around the world build a successful online presence. We hoped our ad would increase awareness of that cause. However, we underestimated the emotional response. And we heard that loud and clear.”

Irving reassured GoDaddy customers and angry Internet users that Buddy, the puppy in the ad, came from a reputable breeder and was safe and sound as GoDaddy’s Chief Companion Officer and the loving pet of a long-time employee.

GoDaddy plans to air a different, hopefully less-controversial ad during the Super Bowl on Sunday.