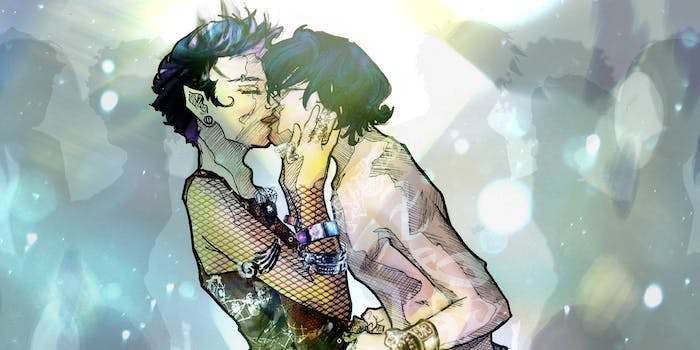 Things are getting worse, not better, for complex representation of queer and genderqueer characters on the silver screen.

Bad news for queer and genderqueer cinema lovers: The film industry still isn’t ready to love you back, at least not according to GLAAD’s recently released annual survey on GLBTQ representation in Hollywood.

The latest version of the Studio Responsibility Index focused on the seven film studios with the highest theatrical grosses last year. The survey reveals that of the 102 films these studios released in 2013, only 17 of them had queer or genderqueer characters—and most of the portrayals were offensive.

No studio mustered better than a 20 percent inclusivity rating using GLAAD’s baseline criteria for queer representation. The “best” studio out of the lot was Sony Columbia, which only turned in two films with positive representation (The Mortal Instruments: City of Bones and Battle of the Year).

The vast majority of this representation was of white gay men, while at the bottom rung were transgender men, who failed to make an appearance in any film from a major studio.

GLAAD also smartly observed that of the two films on the list that portrayed transgender women as characters, they were “better described as ‘impressions,'” because none of the women were played by real transgender women but rather by cisgender men in drag, ala Jared Leto‘s Oscar-winning turn in Dallas Buyer’s Club.

Applying the Vito Russo Test to the number of films released gives an even bleaker picture of the state of GLBTQ representation in Hollywood, as the majority of the films which included queer or genderqueer representation only featured characters for a few seconds, and often purely as the brunt of a gay joke, a source of “gay panic,” or other offensive humor. Still, there were some bright spots, notably Lionsgate’s Peeples, which presented a positive queer relationship to a predominantly African-American viewership, and Sony’s : City of Bones, which introduced a fandom favorite in the queer romance of Magnus/Alec, which will hopefully get more screentime as the series continues.

Given that many of these studios have a history of risk-taking with certain queer and genderqueer-centric films, it’s not a wayward hope that next year will see more positive representation from the list. GLAAD also noted that numerous subsidiary studios like Focus Features and distributors like the Weinsteins had positive track records as well.

Still, it cautioned that “the images present in contemporary Hollywood film are rarely significant enough to leave much of an impact,” and that “[i]n many cases, they may even be doing more harm than good.”

At least we know that examining and identifying the problem is a major step toward providing a solution—and, hopefully, getting Hollywood to listen.