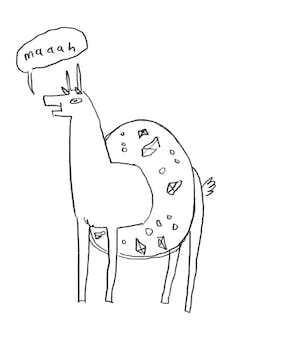 Behind The Pokeymans Project: Gingerhaze’s attempt to recreate Pokémon from scratch

Aspiring artist Gingerhaze invites Tumblr followers to leave descriptions of Pokémon characters for her to recreate as best she can—often to hilarious effect.

Gingerhaze draws Pokémon characters that are completely unrecognizable. That’s because the Tumblr-famous artist doesn’t recognize them herself.

It’s an unusual juxtaposition for the Maryland Institute College of Art (MICA) art student, who is best known for her fratastic Lord of the Rings comics, Broship of the Ring. Fans turn to Haze to provide illustrated pop culture commentary on everything from The Avengers to The Hunger Games—but here, she’s at a loss.

Thanks to protective parents and childhood homeschooling, the 20-year-old artist managed to miss out on Pikachu and his ilk entirely.

“I think my lack of Pokémon knowledge and complete confusion at the descriptions makes people think I’m adorable, like a lost baby duckling or your grandmother trying to use an iPad,” she told the Daily Dot.

“It seems like everyone in my peer group has more Pokémon knowledge than I do.”

Haze, whose real name is Noelle Stevenson, decided to learn about Pokémon in a way that gives her fans a weird glimpse into her mind at the same time. In The Pokeymans Project, she invites Tumblr followers to leave descriptions of Pokémon for her to recreate as best she can.

“I got the idea from another Tumblr, rememberedheroes, where an artist who know doesn’t know much about comics—and who also has a very bad memory—attempts to draw comics characters from memory,” she said. “It looked like fun, so my friend Lloyd and I decided to play a similar game, with a subject in which my own knowledge is sorely lacking: Pokémon.”

Her attempts range from funny misinterpretations to horrific hallucinations.

“[The best one has been] Mawile, without a doubt,” she told us. “The description was really odd and ended in a drawing straight out of my nightmares.”