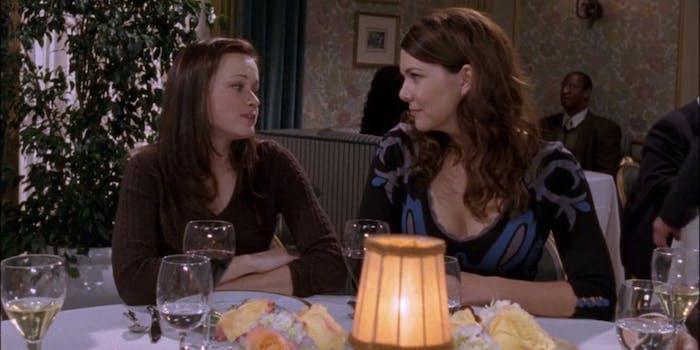 They say you can never go home again, but we'd take a few extra hours in Stars Hollow any day.

The Internet erupted in a shrill whirl of fangirling on Monday afternoon when rumors began circulating that Netflix was planning to reboot the much-beloved Gilmore Girls series.

TVLine first reported that series creators Amy Sherman-Palladino and Daniel Palladino were in talks with the streaming giant to bring back Lorelei and Rory in a miniseries format: four 90-minute episodes, à la the Rockford Files movies of the ’90s.

While details are still vague—an anonymous source is just saying that Netflix is in preliminary discussions with the lead cast—the devout Gilmore Girls fandom rallied around the idea. And it’s not out of the realm of possibility: Sherman-Palladino said at this summer’s cast reunion oat the ATX Television Festival that while nothing was in the works at the time, “nobody here hates each other.”

DUDES. I can't confirm this. But I also can't deny this… https://t.co/KO8gA7j6Us

“It would have to be the right format, the right timing, the right way, [deeper voice] the right budget,” she continued. Considering the chunk of change Netflix has invested in original content and distribution deals to date, it’s distinctly possible that the price is right for a Gilmore reboot.

So if we’re willing to proceed with cautious optimism that this project is really, truly happening, let’s get down to brass tacks: Now what? Here are 11 questions any Gilmore Girls project would have to address in some form or another.

1) How will they address Richard’s absence?

When we last saw the Gilmore patriarch, he’d been through his share of health scares, including serious heart problems in seasons 1 and 7, but it seemed that lionhearted man could never truly leave. Tragically, Edward Hermann, the actor who portrayed Richard, passed away in 2014, leaving a massive hole in the hearts of his fans and castmates. They even left an empty chair on the stage for him during the ATX TV Fest reunion panel.

At the end of season 7, Rory packed up her life and hit the campaign trail with then-Sen. Barack Obama. Now that he’s nearing the end of his second term in office, we clearly need to check back in to see if our leading lady achieved her Christiane Amanpour dreams or if she took a different path.

3) What ever happened to Jess?

My high-school self was always hung up on good-guy Dean and pompous Logan, but the real underdog in the battle for Rory’s heart was always Jess Mariano (Milo Ventimiglia), Luke’s book-loving nephew. We saw him get his life together as Rory’s fell apart, and he and Rory had a rocky reunion in season 6, but he was largely missing from season 7. Is he still in the indie publishing game? Has he moved up to the big leagues, or is he flexing his writer muscles on the side?

4) Is Lorelei finally on good terms with her parents?

After a bumpy ride of deception, disappointment, miscommunication, and more, can this lovable family finally put the “fun” back in “dysfunction”?

5) Can Luke and Lorelei really make it?

No matter which boyfriend you favored for Rory, odds are good you only ever wanted Luke for Lorelei, but can their relationship bounce back from a broken-off engagement and a drunken karaoke serenade?

Life with twins can’t be easy, and the rock & roll life isn’t for the faint of heart (or over-50 crowd).

7) Can they reconcile season 7 with the rest of the plan?

Sherman-Palladino wasn’t involved in the show’s final season, despite her having had the show’s last four words picked out for ages now. If she and Daniel Palladino return to pilot the reboot, how will they contend with the seemingly out-of-character choices their successors made?

Here’s hoping our favorite accident-prone chef hasn’t managed to burn down any more kitchens recently. Meanwhile, is she still happily married with a post-vasectomy Jackson, or did his desire for more kids get the better of him? What ever happened with that accidental third pregnancy?

Paris Geller (Liza Weil, in a role created specifically for her) was studying to be a doctor and a lawyer simultaneously. Given how grossed out she was by Doyle’s cold, we’re assuming she went the legal route, but maybe she’ll surprise us all with a stunning career as a surgeon.

This one speaks for itself.

11) How will they possibly pull this off?

Edward Hermann’s death aside, the crew is going to have a very difficult time reuniting all its actors, many of whom have gone on to helm major series of their own in the interim. Milo Ventimiglia (Jess) starred in Heroes until 2010 and has three projects currently in post-production. Jared Padalecki (Dean) has been Supernatural’s Sam Winchester for 11 seasons now, and Lauren Graham is set to adapt The Royal We with her Parenthood co-star Mae Whitman. Melissa McCarthy (Sookie) has been busy juggling a full slate of Hollywood flicks, too, which could make scheduling with her a nightmare.

There are dozens of threads that we’ll want to pick back up on if this show actually returns to screens, and we definitely have more questions than answers at this point. But as long as they don’t How I Met Your Mother us or make those last four words “was all a dream,” there’s hope for a happily ever after in Stars Hollow.