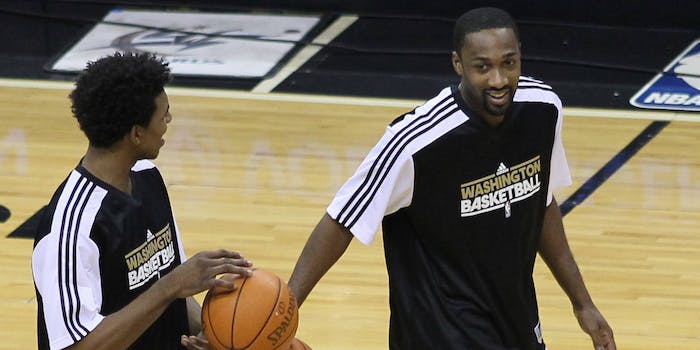 Former Washington Wizards star Gilbert Arenas visited his newly-single friend Nick Young at his estate on Friday. Arenas is known for his antics, showing he’s still on a roll by posting the hang-out to his personal Snapchat.

Arenas took a self-invited tour around the Lakers guard’s home, while snapping the whole journey and cracking jokes from left to right. The house was nearly empty, Arenas joking that Young’s ex-fiancée Iggy Azalea took all the furniture while painting over her name on a wall.

The retired NBA star has a reputation for being a character on social media, posting anything from smashing his ex’s car window to being charged with drawing guns in the team locker room.

Arenas’s jokes caused a circus on Twitter, some even asking for the pair to start a reality show.

Gilbert Arenas snap story has me weaaaaaaaaak 😂😂😂😭😭😭😭 he need his own show.

Gilbert Arenas to Swaggy P: "You got a basketball court in your backyard and still can't get no playing time?" pic.twitter.com/XhbvIxfgi7

Gilbert Arenas is that friend who gives a toast at your rehearsal dinner and ends up getting the whole wedding called off.

Unfortunately, Arenas got carried away and made a tasteless joke referring to Keonna Green, the mother of Young’s child, while flashing a possible knife across the screen.

“I heard you got a problem with your baby mom’s,” Arenas said. “You know I’m the new O.J.”

The look of reluctance can be seen in Young’s eyes, as if asking, “Who invited this guy?”