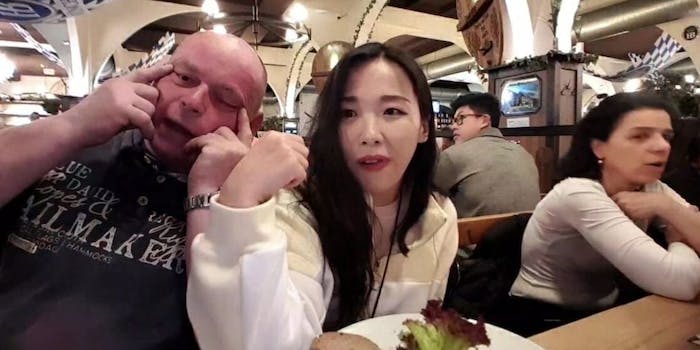 Twitch streamer inadvertently documents all the times she was sexually, verbally harassed on vacation

This is horrifying—and sadly, unsurprising.

Twitch streamer Giannie Lee is visiting Germany for the month. And apparently, men can’t stop verbally and sexually harassing her when she steps out into public.

On three separate occasions, Lee—who has more than 19,000 Twitch followers—recorded strangers racially mocking or making sexual comments to her in a language she can’t understand. It has to be disturbing for a woman in any situation, but especially in an unfamiliar part of the world, and especially since the men who approach her are being told that she is broadcasting their words and actions and they don’t seem to care.

In one incident, a man who identified himself as Turkish approached Lee while she was streaming and began saying, “Ching chong, ching chong, ching chong.” Lee responded by asking, “What are you talking about it?” but brushed off the racial slur. She talked with him for a few seconds, but as he was set to walk away, she looked at the camera and said, “Racist, right?”

In another incident, she was eating in a crowded restaurant when a man sat next to her (he actually physically forced her to move down the bench) and mocked her by slanting his eyes with his fingers. She responded by saying, “Don’t do it. Racist, yeah?” After another older man sat down and performed the same move, she responded by saying, “I love Germany. Don’t become racist, please. It’s racist. Be nice. I love German people.”

Watch I live in Berlin, Germany for 1 month from GiannieLee on www.twitch.tv

But one of the most disturbing encounters occurred when she was speaking with two men while sitting on a park bench. The chat immediately told her to get away from the men. Wrote one follower, “LEAVE NOW.” Another wrote, “RUN.”

Watch I live in Berlin, happy Easter  from GiannieLee on www.twitch.tv

But later, she defended the people of her temporary home. “Some people are blaming German people. Don’t do that. Every German people is so nice for me. [Some] have made a mistake. Others are so nice.”

She then gave a thumbs up to the camera.

The people of Berlin always wave to me with a lovely smile. I am happy every day to stay in Berlin. And I'm grateful to the Berliners for always being kind to this suspicious woman carrying a camera! pic.twitter.com/5rAqNwu6nL

Dot Esports reported that despite the harassment, Lee is going to extend her stay in Germany by another month. Here’s hoping she’s seen the last of any harassment or uncomfortable scenarios, but it’s not likely.