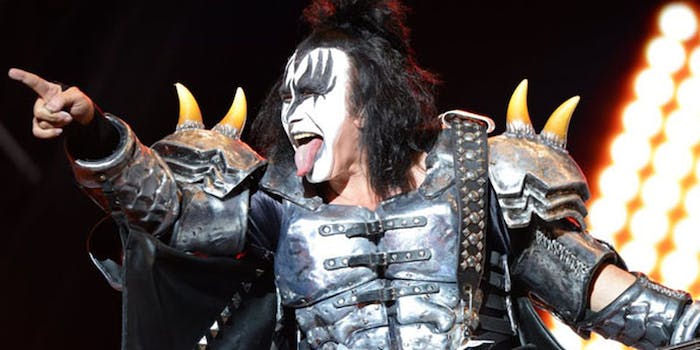 The Kiss singer has become the real-life version of Abe Simpson yelling at a cloud.

Every few months or so, someone—usually an old white man—tells us that file-sharing killed rock and roll. This week’s old white man: Gene Simmons.

It was just a few weeks ago that the Kiss singer offered the world his narrow-minded advice on depressed people and suicide. Now, he’s offered his narrow-minded opinion on another divisive topic, because people keep asking for his opinions, apparently. In an Esquire interview with his son, Nick, Simmons reheats a tired statement: Rock is dead.

And not just dead. It was murdered:

The death of rock was not a natural death. Rock did not die of old age. It was murdered. And the real culprit is that kid’s 15-year-old next-door neighbor, probably a friend of his. Maybe even one of the bandmates he’s jamming with. The tragedy is that they seem to have no idea that they just killed their own opportunity — they killed the artists they would have loved. Some brilliance, somewhere, was going to be expressed, and now it won’t, because it’s that much harder to earn a living playing and writing songs. No one will pay you to do it.

The masses do not recognize file-sharing and downloading as stealing because there’s a copy left behind for you — it’s not that copy that’s the problem, it’s the other one that someone received but didn’t pay for. The problem is that nobody will pay you for the 10,000 hours you put in to create what you created. I can only imagine the frustration of all that work, and having no one value it enough to pay you for it.

Since he’s an old white man, he also wonders where the next Bob Dylan is, and the next Dark Side of the Moon, since we’ve made no progress musically since the ‘60s and ‘70s, and no genres besides rock exist. So who is to blame for this crime? Well, when you’re an old white man, you blame the kids:

My sense is that file-sharing started in predominantly white, middle- and upper-middle-class young people who were native-born, who felt they were entitled to have something for free, because that’s what they were used to. If you believe in capitalism—and I’m a firm believer in free-market capitalism—then that other model is chaos. It destroys the structure. You’ll never understand unless you’re the one that wrote the song, and you were the one that had the band, whose music people took without paying you for. Once you’re the one who’s been robbed, there’s a moment of clarity.

Back in January, Simmons had even more opinions about file-sharing. In an interview with Metal Hammer, he explained that the early pioneers of peer-to-peer sharing, like Napster, should have been “bitch-slapped,” and worse:

Gone down with the FBI, seized everything and put everyone in jail. But then they should have done what the Allies did with the Nazis: made them work for us.

In 2010, Simmons, speaking at the MIPCOM convention in Cannes, France, said the solution to file-sharing was to “sue everybody,” including your fans. His MIPCOM comments elicited the ire of Anonymous, which launched a virtual attack on Simmons’s “brand,” and knocked his official website offline temporarily.

In 2008, Simmons blamed Radiohead for killing the music industry, and also his fans:

The record industry is dead. It’s six feet underground and unfortunately the fans have done this. They’ve decided to download and file share. There is no record industry around so we’re going to wait until everybody settles down and becomes civilised. As soon as the record industry pops its head up we’ll record new material.

So, Simmons has complained a lot about this issue but hasn’t offered any solutions, or embraced any of the positive aspects of file-sharing. This is an ever-evolving issue on an Internet full of growing pains. File-sharing has become a form of discovery and a necessity, a way to get your music to a bigger audience, one that lives primarily online and consumes via social media.

Simmons has become the real-life version of Abe Simpson yelling at a cloud.

But don’t assume he’s complaining about his very comfortable lot in life and the success that making music has brought him:

And let’s be clear: I’m not the guy to be pouting and complaining about stuff. I make a decent living. I’m very, very lucky. But that’s because we started before the chaos, in the days when people had to buy records. If you didn’t like a band, you didn’t buy their albums, and the people decided.

So maybe we should all just stop buying Kiss albums. Or at least we could just stop listening to Simmons’s opinions on things. Then maybe he can fade quietly into irrelevance, while the music industry continues to evolve without him.