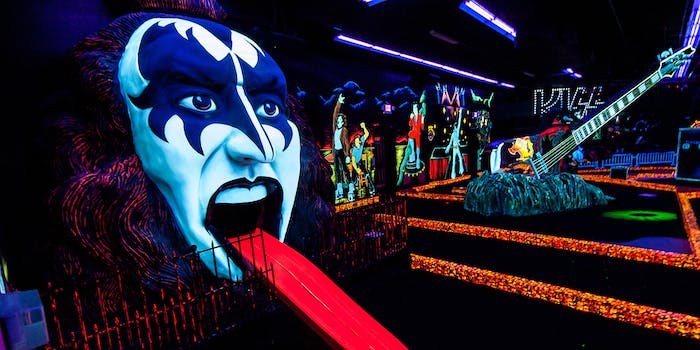 It should probably go without saying, but... please don't take advice from Gene Simmons

It also now makes infinitely more sense why KISS front man Gene Simmons’ tongue can stretch so far out of his mouth—that foot really needs all the room it can get.

Just days after the man who made a living screaming in unintelligible octaves offered invaluable advice to immigrants on HuffPost Live, suggesting they “learn to speak goddamn English,” Simmons is back at it again with an even more ridiculous tirade: This time, he’s suggesting that people who are depressed should kill themselves.

In an interview with Songfacts.com, Simmons took a simple question about whether he keeps in touch with his bandmates to share his bonkers point of view on depression.

No, I don’t get along with anybody who’s a drug addict and has a dark cloud over their head and sees themselves as a victim. Drug addicts and alcoholics are always: ‘The world is a harsh place.’ My mother was in a concentration camp in Nazi Germany. I don’t want to hear fuck all about ‘the world as a harsh place.’ She gets up every day, smells the roses and loves life. And for a putz, 20-year-old kid to say, ‘I’m depressed, I live in Seattle.’ Fuck you, then kill yourself.

I never understand, because I always call them on their bluff. I’m the guy who says ‘Jump!’ when there’s a guy on top of a building who says, ‘That’s it, I can’t take it anymore, I’m going to jump.’ Are you kidding? Why are you announcing it? Shut the fuck up, have some dignity and jump! You’ve got the crowd.

Oh. Pleasant. While it goes without saying that Gene Simmons should not be your therapist, let me remind everyone anyways: Do not let Gene Simmons be your therapist. Objectively, this is incredibly bad advice. Unsurprisingly, he instantly drew the ire of all rational human beings ever, including Motley Crue bassist, Nikki Sixx, who blasted Simmons on his podcast, Sixx Sense.

It’s pretty moronic because [Simmons] thinks everybody listens to him, that he is the God of Thunder. He will tell you he is the greatest man on earth, and to be honest with you, I like Gene. But in this situation, I don’t like Gene. I don’t like Gene’s words,” Sixx said. “There is a 20-year-old kid out there who is a KISS fan and reads this and goes, ‘You know what? He’s right. I should just kill myself.’

Urgh, Gene Simmons, you are horrible and I don’t care if a SWARM of vampires attack me for saying so.

Simmons took to Facebook today to offer a non-apology for his comments, further underscoring the fact that if you don’t have something nice to say, you likely shouldn’t say anything at all.

On the bright side, we now live in a world where Nikki Sixx is a voice of reason, so at least there’s that.